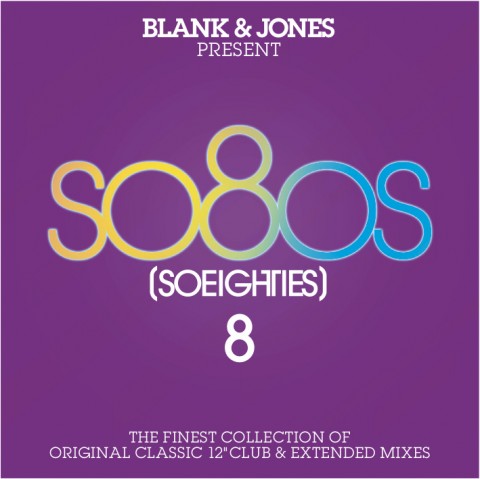 A new volume of classic twelve-inch club and extended mixes from the 1980s will be issued on 3 May by curators Blank & Jones. SoEighties volume 8 is an unmixed three-CD set and we have been informed by Blank & Jones that all 34 tracks are from the original source “100% vinyl rip free”.

This set includes George Michael‘s long ‘Monogamy Mix’ of 1987’s I Want Your Sex (inexplicably omitted from the 2011 deluxe editions of Faith), the extended remix of Katrina and the Sunshine‘s Walking On Sunshine (first time on CD) and Shout from Tears For Fears in it’s rare ‘Extended Mix’ form (i.e. not the ‘US Mix’).

We have asked Blank & Jones to comment on each track within this set and you can see what they have to say below (along with the track listing, of course).

Due to licensing restrictions, SoEighties 8 is only officially available in Germany. Of course, it’s very easy to order via the German Amazon site, so no major issues there!

“To the best of our knowledge first time on a full CD, wasn’t included on the “faith” deluxe editions. only released as 3″ cd single with track ids in the late 80s”.

“To the best of our knowledge, only released once on a CBS collection in Australia in the ’80s. Even the Warner archive was not able to find this mix in their UK archive. We cleaned some tape skipping (sound was very high at the very beginning and turns a bit more low after 30 sec)”.

“This is the full 12″ version mixed by Julian Mendelsohn from master tape”.

“Another master tape transfer done by the wonderful Warner Archive team in the UK. Usually everyone uses the US extended version by the Latin Rascals. This is the classic dance mix, to the best of our knowledge, the first time on CD”.

“We love this track, mixed by Jellybean, but we think it appeared somewhere else before…nevertheless, great song”.

“To the best of our knowledge, only released once on CD in the 80s on a Japanese Mercury sampler”.

“This was kind of a last minute addition. We rediscovered the track while doing the mastering for German “Formel Eins” CD editions (first German music/video clip tv show in the ’80s)”.

“This is the extended version, NOT the US mix. We used the version from the Mobile Fidelity edition, but edited the very end where the master fader comes back in”.

“This mix appeared as b-side of a CD single. The intro is just breathtaking…U2 would be proud of a stadium anthem like this…”.

“Was released of course, on the themes box, but we quite like this song…”.

“To the best of our knowledge a CD premiere. Sadly this mix was missing on the Cherry Red reissue of the “Theodore and Friends”…now complete. From EMI archives UK from master tape”.

“We are very proud of this track: It took EMI archives weeks to track down this mix. Isn’t it funny that the extended version of one of the biggest single hits from EMI ever, wasn’t released on cd until now? From the original master tape”.

“Released on the CD video single in the 80s. Mixed by Francois Kevorkian, one of our favourite mixer of the 80s….”.

“Jane was always a bit in the shadow of Belinda after The Go-Gos split up, but this song is still a masterpiece and deserves a “rediscovery”!”

“The drumming is different on this mix. Sadly many compilations use the “older” version from the album, but this is the one you know from the radio, back in the days”.

“When music movies became fashionable in the ’80s (Flashdance, Footloose etc) former ski guy Willy Bogner directed this movie about dreaming of skiing…the main theme was produced by Harold Faltermeyer. To the best of our knowledge, only released on a CD sampler in the ’80s”.

“Another CD premiere. Transferred from master tape. Michael Cretu is a fantastic producer (Enigma, Sandra, Moti special etc) and this 12″ is one of his best solo releases”.

“What an anthem. Released on the same label as Wham! back in ’83. Only appeared once on a Dutch CD collection in the ’80s, to the best of our knowledge”.

“Was released on CD single in the ’80s, one of our favourites…just great”.

“This makes us very proud. We got a copy from the master tape of this Steve Thompson mix from the EMI US archive. First time ever on CD”.

“The first copy we got from Warner archive was mono. So they went back to look for a saftey copy, and found it! Great mix by Ian Levine”.

“The edit was released on a promo CD, this is the full version!”

“Another fantastic Francois Kevorkian mix of the legendary ska band”.

“The historical track where Snap! sample “the power” and Moby borrowed party for “Go”. Produced by Jellybean. From the Warner US archive”.

“On the original 12” release this mix was just no. 2, but we always loved this more original version. From Warner UK archive master tape.

“Was released on a ’80s sampler already, but tried to improve the sound a bit more”.

“Only released once as B-side of a CD single. Soundtrack to the Ridley Scott film Legend…one of Ferry’s finest tracks, though the quality of the 12″ mix is not the best”.

“The third Francois Kevorkian mix on this collection…masterpiece!”

“This is just a great love song….”

“Originally only released as a 3” CD single in the ’80s…great mash up of the two songs…sadly forgotten on the “absolute” artist collection….”

“Released on cd single in the 80s….this is a fantastic song with a great vibe…”