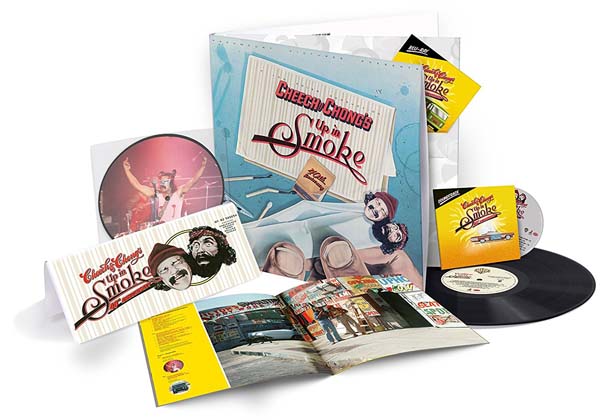 The 40th anniversary of counter-culture comedy duo Cheech and Chong‘s 1978 film Up In Smoke is being celebrated with a forthcoming deluxe collector’s edition box set.

Credited with establishing the ‘stoner’ comedy genre, Up In Smoke tells the story of a  jobless, marijuana-smoking drummer who is told to either get a job by sundown or be sent off to military school by his parents. It was never exactly a critics’ favourite but was popular with its audience and earned over 40 million dollars at the US box office.

The new box set is very much a multimedia celebration. It consists of a 40th anniversary blu-ray of the film (with loads of bonus features such as a commentary by  Cheech Marin and director Lou Adler, featurettes and deleted scenes), the original soundtrack on CD and vinyl, a seven-inch picture disc (Earache My Eye b/w Lost Due To Incompetence (Theme From A Big Green Van)) and ‘extras’ which include a poster, a booklet with new essays by both Cheech and Chong and oversized ‘usable’ Up In Smoke ‘rolling papers’!

The CD of the album in this set features a new 2018 version of Up In Smoke along with a previously unreleased version of the same song with an additional Spanish verse by Cheech. The vinyl version is back in print for the first time since 1978.

The whole thing is packaged in a large format 12″ x 12″ six-panel gatefold package and this is a limited edition of 5,000.

The Up In Smoke 40th Anniversary Collector’s Edition will be released on 20 April 2018.

Up In Smoke vinyl LP

7″ Picture Disc
1. Earache My Eye
2. Lost Due To Incompetence (Theme For A Big Green Van)

The CD also includes two unheard versions of Up In Smoke

Blu-ray
Up In Smoke Movie +

Commentary by Cheech Marin and director Lou Adler
How Pedro Met the Man: Up In Smoke at 40-NEW!
Roach Clips with Optional Commentary (deleted scenes)
Lighting It Up: A Look Back at Up In Smoke
“Earache My Eye” featuring Alice Bowie: Animated Music Video
Cheech & Chong’s “The Man Song”
Vintage Radio Spots
Theatrical Trailer