Parlophone will release a 50th anniversary vinyl picture disc of David Bowie’s classic album Hunky Dory, in January. This new edition will feature the 2015 vinyl remaster and a poster featuring the annotated back cover image of the album.

Long acknowledged as one of Bowie’s best albums, Hunky Dory had to wait until the Ziggy era before enjoying some success. The first single, ‘Changes’, did nothing in the UK chart and it was only 18 months after Hunky Dory‘s release – and a year after The Rise and Fall of Ziggy Stardust and the Spiders from Mars – that ‘Life On Mars’ was a hit and the album entered the UK top five.

In addition to the vinyl picture disc, Parlophone are issuing a new mix of ‘Changes’ as a streaming single (listen below).

The vinyl picture disc of Hunky Dory will be issued on 7 January 2022, one day before what would have been David Bowie’s 75th birthday. It is limited to 8,000 units. 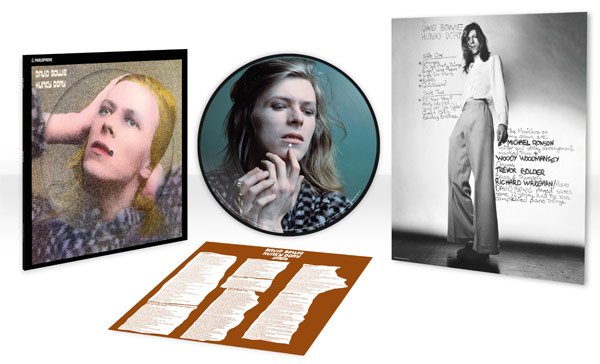