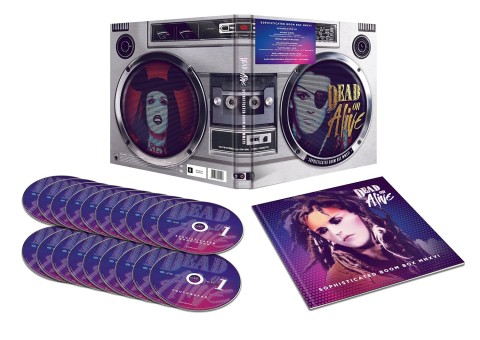 Demon Music have investigated the errors on the recently issued Dead Or Alive box set and will replace more than half the discs in the Sophisticated Boom Box to fans who request replacements….

You can read the detail around the fixes below (taken from this post on Demon’s website) and the process for getting replacement discs is also laid out.

We have carefully read through all of the comments and e-mails we have received, and we are now in the process of rectifying all issues that were raised. To ensure that the changes we have made are correct, we have enlisted the help of an expert to act as a second pair of eyes and ears, and are satisfied the changes below address the issues that have been highlighted.

Thank you for the feedback – it is appreciated.

Demon will be offering replacement discs of 8CDs and 2DVDs to all customers who e-mail to the following e-mail address deadoralive@optimal-media.com

This is the process:

Below are the issues that were identified and the actions that have been taken:-

Track 1 – ‘I’d Do Anything’
Issue – Finishes with an extra “do do do” which sounds odd on play back.

We have corrected this error and are remanufacturing this disc

Track 5 – ‘What I Want’ (1984 Dance Mix)
Issue – Plays the same as Track 2 ‘Original Dance Mix’. Upon seeking advice from an expert we have now corrected this and will re-manufacture this disc

Despite being extremely similar, these versions are different. We understand that the (Dub Version) was an earlier version of ‘Keep That Body Strong’. From a historical perspective, we are keeping this in place.

Issue – plays in Mono
Issue – Track 4 – My Heart Goes Bang [American WIPE-OUT Mix]
Issue – Track 8 – You Spin Me Round [Big Ben Mix]. Sounds like it’s a reconstruction, using a clean intro (lifted from the Performance Mix), and a clean 7″ single version, with the bells/chimes in between coming from a crackly vinyl source

We have corrected the mono error and are remanufacturing this disc
Track 4 – My Heart Goes Bang [American WIPE-OUT Mix] should actually be listed as an ‘Edit’. The full length mix has never been released on CD, however at present we are unable to source a master with the full, unedited 6:45 duration.
Issue – Track 8 – You Spin Me Round [Big Ben Mix] – We were supplied an analogue tape by Sony. We believe the chimes may have been lifted from another source and edited to create this unique mix at the time of production.

Issue – There is an awkward gap between ‘Then There Was You’ and ‘Come Inside’ on the original album sequence.
Issue – ‘Brand New Lover’ (Edit) appears to be slower than any other version.

Issue – Track 13 ‘Something In My House’ (Short Version) should be an edit of the album version but plays the 7″ remix.

We have sourced a replacement master of the 3.57 “7” short version” and we are remanufacturing this disc

Steve Coy included this version of ‘Fan The Flame’, as it was previously unreleased and acts as an opening prelude for the album, which was re-sequenced. Track 1 now segues seamlessly into Track 2 ‘Unhappy Birthday’, which was the original Track 2 on the 1990 Japanese release.

Issue – Tracks 1 and 6 ‘Rebel Rebel’ are exactly the same (they should be different mixes).
Issue – Track 12 should be ‘International Thing’ (NU-NRG 12″ Remix) but plays the album version.

Track 6 is ‘The Hole Mix’, whereas Track 1 is an earlier shorter version of that mix. Track 1 and 6 are identical up until 6:10-ish. Track 1 has an “UGH!” at this point and ends abruptly. Track 6 has no “UGH!”, and starts to fade out instead… so they’re the same mixes, with very slight differences to the endings.

We have sourced a replacement master of the 7.02 ‘International Thing’ (NU-NRG 12″ Remix) and we are remanufacturing this disc

We have gone back to the source masters and fixed all of these issues and are re-authoring these discs.

We would also like to highlight that in the process of putting together this set we have used the Sony and Steve Coy masters. There are no MP3s and vinyl rips used.