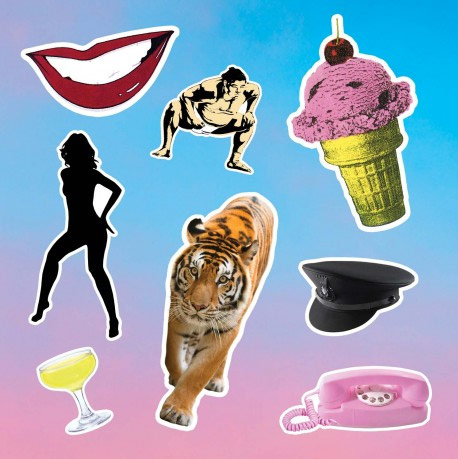 Although this artwork “is not final” the above image is expected to be the cover of Duran Duran‘s fourteenth studio album, Paper Gods, which will be released in September.

The album cover references visual iconography of Duran Duran’s past, including the the lips from Patrick Nagel’s Rio cover, a Chauffeur‘s cap, the sumo wrestler from the Girls On Film video, and – a weird one this – the ice cream from the cover of Perfect Day, the lead single from the rather derided Thank You album.

There will be various bundles (with T-shirts) available via Warner Music stores (no pre-orders on Amazon yet) and the deluxe edition will come in an embossed sleeve and is expected to include three bonus tracks and include a sticker sheet which features images from the cover and others – Lauper alert!!

Paper Gods is due for release on 11 September 2015 (18 September in the US). The first single Pressure Off is expected to available any day now. What do you think of the artwork? Leave a comment and let us know.

Duran Duran are expected to release their fourteenth studio album in September 2015.