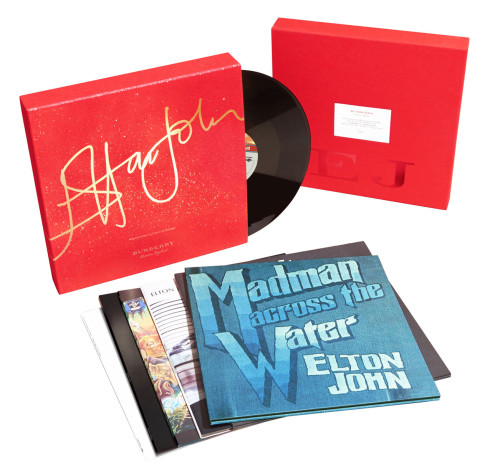 A new Elton John vinyl box has been produced in association with luxury British brand Burberry and will be available exclusively in their stores from November.

Limited to 800 units, this box features six albums chosen by Elton presented in a specially designed Burberry box, individually numbered and “flecked with gold glitter” and has Elton’s signature embossed in gold lettering.

From a collector’s point of view Songs From The West Coast is notable since that has never been issued on vinyl. These are 180g pressings have apparently been remastered by engineer Bob Ludwig, and the vinyl cut at Abbey Road Studios in London (by Sean Magee). It’s not clear whether any of these are new remasters or utilising previous work by Ludwig. Original artwork will be replicated for these albums.

Speaking about this set Elton said “choosing these six wasn’t easy; however I think they are a very good representation of my catalogue between 1970 and 2001.”

Obviously being a luxury brand, Burberry has attached a ‘luxury’ price to this product – £225 or $375. That’s a lot of cash when you consider this doesn’t come with even a ‘proper’ Elton signature (just a gold embossed one). SDE’s attempts to secure a review copy fell on deaf ears! (Burberry aren’t supplying press samples).