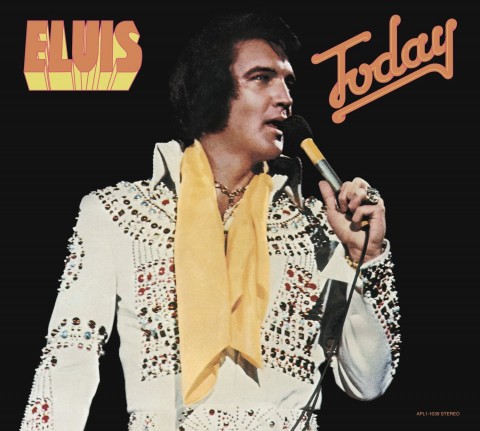 Recorded in RCA studios in Hollywood, Today featured The King interpreting songs recorded by artists such as Tom Jones (Green, Green Grass Of Home – a UK single), Don McLean (And I Love You So) and The Pointer Sisters (Fairytale). The album also contains T-R-O-U-B-L-E which was a top 40 hit in the USA.

For this Legacy Edition, disc one features the original album and an alternate mix of the album without producer Felton Jarvis’s ‘controversial’ overdubs.  In many instances the original session mixes sound very different indeed. These overdub-free versions of the songs first appeared on the 2005 ‘Follow That Dream’ (FTD) edition of Today but have never had a wide commercial release.

The second CD offers live performances recorded throughout the southern United States in May and June of 1975, just months after the Today sessions. These performances have previously only been released on the limited 8LP box set Elvis Aron Presley, first released in 1980.

The Legacy Edition of Today is released on 7 August 2015.

NB: At the time of writing the UK price is much higher than it should be. SDE expects this to drop to around the £13 before release. Germany and France more accurately reflect the true cost for this release.