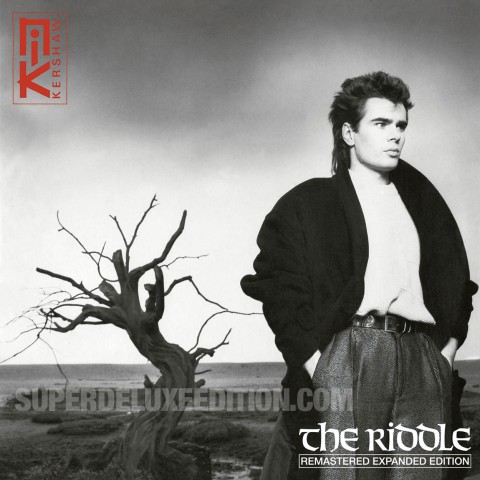 As we revealed on our Facebook page on Tuesday, Universal Music will issue a deluxe edition of Nik Kershaw‘s second album of 1984, The Riddle, on 12 August 2013.

The reissue is remastered by Dennis Smith and comes with a bonus disc put together by Nik himself.

Today we can exclusively bring you the full track listing for this reissue (see below). As expected, the bonus disc includes the twelve inch remixes for all three singles (The Riddle, Wide Boy, Don Quixote) and B-sides So Quiet and Don’t Lie. Additionally six Riddle album tracks are included, as performed live at the Hammersmith Odeon on 31 December 1984.

What doesn’t make it onto the bonus disc is the seven-inch remix of Wide Boy, or – rather surprisingly – Progress (live) which was the B-side to The Riddle single. In terms of other commercially available material from the singles, there was also an interview with Nik on The Riddle cassette single which might have been considered.

The early/demo version of Wide Boy which was recorded during the Human Racing sessions is notable by its absence, indeed, demos or work-in-progress seems to be of no real interest to Mr Kershaw.

What do you think of this deluxe edition? Leave a comment and let us know your thoughts.