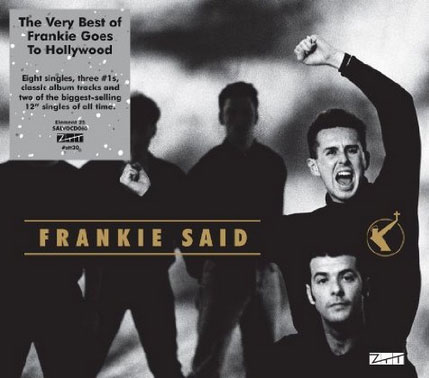 After a couple of years of ZTT archival projects that have resulted largely in 2CD expanded deluxe reissues and twelve inch compilations, Salvo Records are keeping things relatively simple this autumn with a series of one-disc ‘best of’ collections.

Two weeks ago came Propaganda‘s Noise And Girls Come Out To Play, a greatest hits selection for the masses, with enough unreleased edits and quirkiness to keep the faithful interested. In the same vein Frankie Goes To Hollywood‘s hits are gathered on to one compact disc and will be released as Frankie Said on 5 November 2012.

All seven singles are present and correct (Salvo are claiming eight, with War! counted as a single due to its double A-side status on 12-inch) including the three number ones from the Welcome To The Pleasuredome album. Some album tracks and a live cut are also included.

A few CD debuts should be enough to encourage fans to dip into their Frankie slush fund and place an order for Frankie Said. Previously unreleased on CD tracks include Relax (the last seven inches), a promo-only mix also known as the Warp Mix, and a seven-inch version of the Warriors Of The Wasteland Attack Mix. Two Tribes (we don’t want to die) is the relatively rare seven-inch picture disc mix, and a Frankie compilation wouldn’t be complete without a few twelve inch mixes, with remastered versions of the classic Annihilation and New York remixes of Two Tribes and Relax respectively, doing the honours.

Frankie Round Table: “Inside the Pleasuredome” team talk to SDE