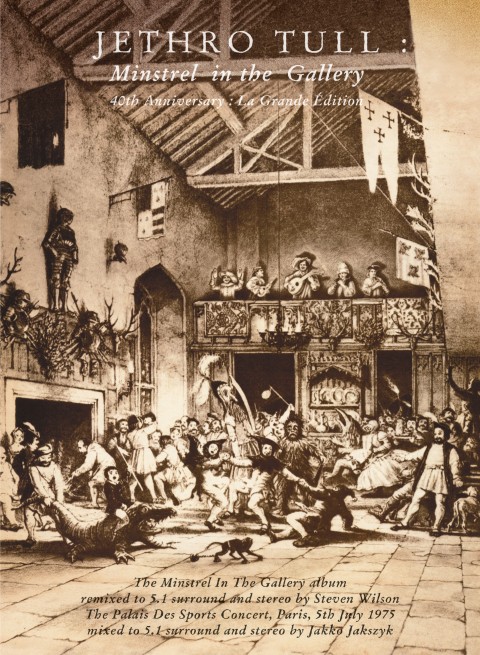 Jethro Tull‘s 1975 studio album, Minstrel In The Gallery will be reissued as a four-disc deluxe edition in May.

The 40th Anniversary La Grandé Edition, as it is being called, will be a 2CD+2DVD set that will feature a new stereo and surround sound mix of the album by Steven Wilson along with seven bonus tracks, six of which are previously unreleased.

The second CD in the package features a live recording of the band performing at the Olympia in Paris on July 5, 1975, a few months prior to the release of Minstrel In The Gallery. A 5.1 surround mix of this live performance is also included on one of the DVDs (King Crimson guitarist Jakko Jakszyk mixed the stereo and 5.1) along with an eight and a half minute film of the band performing Minstrel In The Gallery in Paris from July 1975.

This 40th Anniversary La Grandé Edition of Minstrel In The Gallery will be released by Parlophone on 4 May 2015. A single CD and limited edition vinyl pressing of the Steven Wilson also be released.

The DVDs will feature the DTS & DD 5.1 surround mixes as well as the 96/24 PCM stereo mix and and an eight and half minute film of the band recorded in Paris on 6th July 1975.