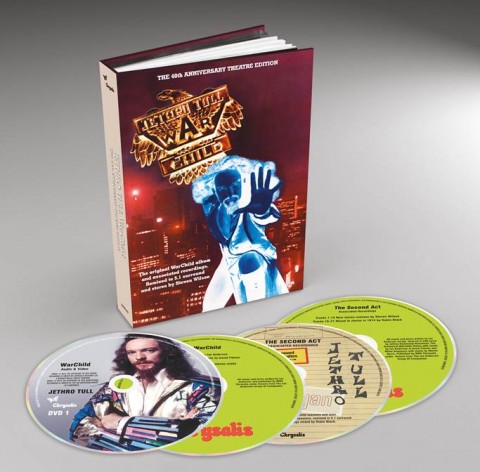 Parlophone will reissue Jethro Tull‘s 1974 album WarChild this November as a limited edition 2CD+2DVD set that includes a 5.1 remix by Steven Wilson and a wealth of additional material, much of it previously unreleased.

The album originally formed part of a broader project that was to encompass a feature-length film and a soundtrack album but the latter two elements never materialised. This new edition of WarChild is dubbed the 40th Anniversary Theatre Edition and includes on a second CD many orchestral pieces written for the film’s soundtrack, most of which are unissued until now. Alongside the orchestral pieces on the second disc set some ‘associated recordings’ from the original sessions.

The orchestral pieces have also been remixed by Steven Wilson into hi-res stereo and 5.1 surround sound. These mixes can be found on the one of two DVDs within this package. Joining that material are a further six additional orchestral recordings mixed by Robin Black in 1974. These are all 96/24 PCM stereo.

Another DVD combines audio and video; the audio element includes flat transfers of the original LP mix at 96/24 along with the quadrophonic version (with two bonus tracks) in 4.0. In terms of video we are offered ‘The Third Hoorah’ promo footage as well as film from a a January 1974 photo session and press conference when the whole WarChild project was announced.

An 80-page booklet comes with the ‘bookset’ packaging and includes new writings on the preparation and recording of the album, a film script synopsis, track-by-track annotations by Ian Anderson and rare and unseen photographs.

WarChild 40th Anniversary Theatre Edition will be issued on 24 November 2014. The full track listing is below.

BMG is to issue Jethro Tull: The String Quartets in March, an album of classic…