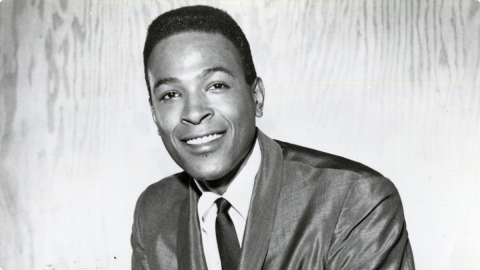 The collection kicks off with the soul legend’s Motown debut The Soulful Moods of Marvin Gaye (1961) which is full of jazz/pop standards from the like of Irving Berlin and Cole Porter, while the second album, That Stubborn Kinda Fellow (1962) moves into R&B with Gaye co-writing many tracks including the song that launched Paul Young‘s career, Wherever I Lay My Hat (That’s My Home).

When I’m Alone I Cry (1964) is a product of Gaye’s early battles with Berry Gordy over direction, with the singer again reluctant to embrace a soul/R&B sound and instead focusing on being a jazz vocalist. Together (1964) with Mary Wells was Gaye’s first top 40 album in the US pop charts and the collection of show tunes and standards did provide a couple of top 20 singles. Hello Broadway was a third album in that  year and a switch back to soul/R&B for How Sweet It Is To Be Loved By You (1965) gave Marvin Gaye his first really big hit single, thanks to the Holland-Dozier-Holland penned title track. This vinyl box is completed by Gaye’s Tribute To Nat King Cole which was released in November 1965 just nine months after Cole’s death.

Marvin Gaye expert Harry Weinger has overseen this set which sees many of these early records back in print on vinyl for the first time in quite a while. Weinger did the 40th Anniversary What’s Going On super deluxe, amongst other Gaye releases.

The Marvin Gaye 1961-1965 vinyl box will be released on 20 April. SDE advice is get your pre-order in with Amazon Spain pronto, as it is offering a great price at the time of writing (under £80) significantly cheaper than elsewhere (e.g. UK price is £110).