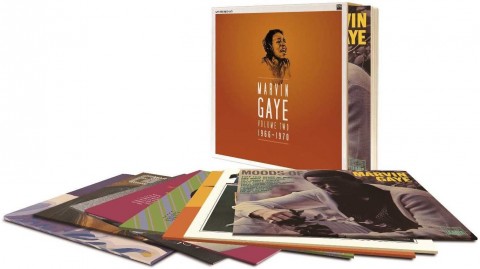 Volume One, as previewed by SDE back in February, took listeners up to A Tribute to the Great Nat “King” Cole (1965), and included his 1964 duet with Mary Wells, Together, which gave him his first US top 40 album.

Currently, Amazon UK are incorrectly flagging this as a seven-disc set (even though their own preview image shows eight albums!), but don’t be misled. All of the Gaye’s eight studio albums – four solo long-players and four duet albums – recorded between 1966 and 1970 are included. That is:

Each album is pressed on 180g vinyl, presented in sleeves purported to be exact replicas of the original releases, and all are packaged together in a rigid card outer box. The set also comes with a download code for MP3s.