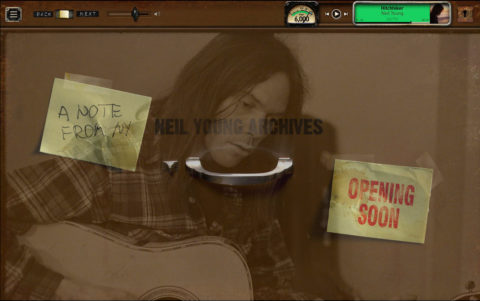 Neil Young is preparing to put his entire audio archive online so that “every single track or album” he has produced since 1963 will be available to be streamed at up to ‘full resolution’.

He is developing a new NYA (Neil Young Archives) ‘timeline‘ feature on his website that will allow fans to browse the music and zoom in and out of particular eras to see more detail such as dates of recording sessions, album art, and credits. Alternatively, the archive can be accessed using the NYA ‘filing cabinet‘ interface, where the it is presented chronologically; stored on ‘info cards’ with associated credits, memorabilia, films or videos. Information is still being added to the NYA, which Young describes as a ‘living document’.

All released material is available with unreleased album art ‘pencilled in’ on the NYA timeline so fans can see where they will appear “once they are completed”.

NYA will use Xstream Music high resolution streaming by Orastream. Neil makes a point of saying that Xstream Music master recordings always use “pure uncompressed masters”. It’s an intelligent system that adapts to your current bandwidth to deliver the best audio quality possible, up to hi-res 192 (which requires 6000 kbps – kilobits per second). The little analog-style meter on the NYA interface (see image above) informs you what bandwidth and musical audio quality you are getting.

Neil Young confesses that he is “very interested in collecting and organization as well as mechanical things and old school record keeping.” He released a physical box set of volume one of his archives, back in 2009 which spanned the period 1963-1972. That box was available on CD, DVD and Blu-ray. The blu-ray edition featured BD-Live technology, which allowed Neil to add new content after the physical set was released, although only half a dozen or so previously unreleased tracks were ever issued this way and such content stopped in April 2010, less than a year after the Archives box came out.

It’s not clear whether this digital archive project signals the death knell for future physical box sets, although SDE suspects not. The forthcoming release of Hitchhiker on CD and vinyl indicates that Neil hasn’t abandoned physical releases, although he may have done so for hi-res audio. In in his ‘note’ on the Archives homepage Young makes no references to cost or any kind of subscription model for this new digital archive, so are we to assume that this will this be a free service?

More news on Neil Young Archives when we get it. Visit the NYA holding page.

SDE Sidebar: How have other artists fared with digital archives? 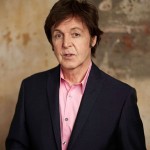 Paul McCartney announced something similar to Neil’s digital archive back in 2010 – a collaboration with HP to “digitize and deliver” his library via a “private cloud”. Paul may or may not be using this digital platform internally at MPL, but from a fan point of view nothing has ever been delivered by this enterprise, despite Paul’s claims at the time – he said “I hope it will allow people who might be interested to access parts of our archives they might otherwise not be able to.” Paul continues to release his archive physically via his archive release series and when he does occasionally offer digital-only content it’s not very cutting edge. He delivered three Flowers in the Dirt demos (for free) on his website this year via standard clickable HMTL links (these downloaded low bit-rate MP3s). 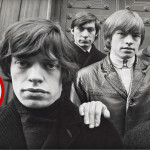 In late 2011 The Rolling Stones announced stonesarchive.com a site that “unlocked the door to their archive” and would allow fans to hear unheard music (concert recordings) such as 1973’s The Brussels Affair, via good value MP3 and FLAC downloads. The ‘Stones certainly hadn’t abandoned physical releases though, because a year later the same concert was as three limited edition box sets that started at $750, with the most expensive variant costing $1500! A visit to stonesarchive.com today shows a semi-moribund website. If you click on any link to buy any digital audio (e.g “Buy The Brussels Affair“) you are simply re-directed to generic Rolling Stones Shop which has exactly ZERO archive audio for sale. 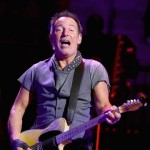 In 2014, Bruce Springsteen launched his own website devoted to delivering live performances both digitally and physically. All music can be purchased as MP3s, CD quality lossless (FLAC and Apple Lossless), and Hi-Res. Physical CDs can also be bought. Live Bruce Springsteen is still going strong and boasts a massive archive. The Boss has also used this platform to give away free downloads, such as in December 2015 when he offered a Christmas gift of an hour of previously unreleased live music from The River Tour in 1980.

SDE Summary: He’s not called ‘The Boss’ for nothing. Excellent job.