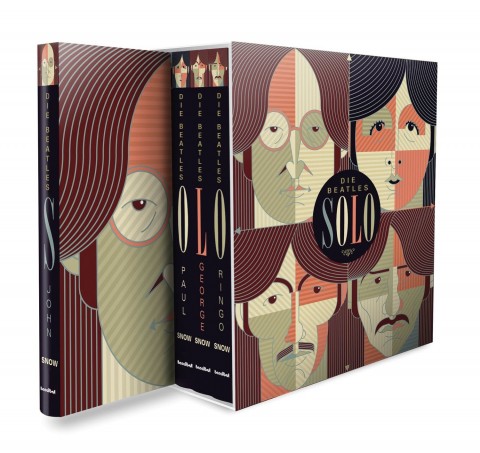 Biographers of individual Beatles are often guilty of focusing on the well told story of the Fab Four and then skipping over the period when the musician in question wasn’t a Beatle anymore –  the solo years.

So it is good to see that journalist Mat Snow has done the opposite and ignored the period where the boys were toppermost of the poppermost, in his new four-volume book set The Beatles Solo.

Collectively, John Lennon, Paul McCartney, George Harrison, and Ringo Starr have released 70 LPs and 900 songs since 1968, and The Beatles Solo promises to take in all the highs and lows of this post-Beatles era. As Snow points out, this includes ‘masterpieces and missteps, triumphs and tragedies, moments of clarity and serious lapses in judgment’.

This set contains four illustrated books – one for each Beatle – and totals nearly 400 pages that include photos, quotes, lyrics, and memorabilia. The four books are packaged in a slipcase (see image of German edition above).

The Beatles Solo: The Illustrated Chronicles of  John, Paul, George and Ringo after The Beatles is published on 17 October in the UK, with a slight variation in other territories.

Mark Lewisohn on The Beatles “All These Years” Extended Edition