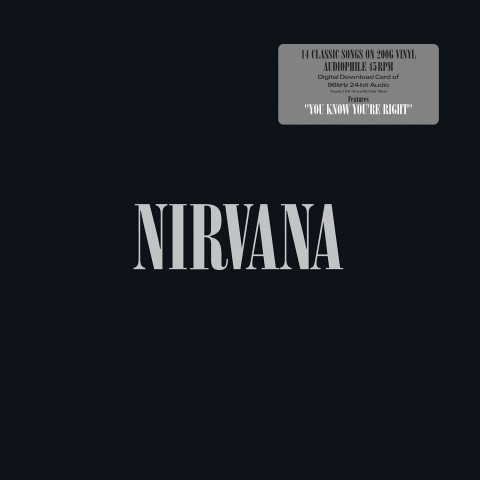 Nirvana‘s 2002 self-titled compilation is being reissued on vinyl and blu-ray audio next month.

The 14-track collection is a solid overview and features the last studio recording, You Know You’re Right, all the well known singles and two tracks from the MTV Unplugged performance, including David Bowie’s The Man Who Sold The World.

This isn’t being re-released on CD but there will be two vinyl versions a standard 180g LP and a special deluxe 2LP set cut at 45RPM. Additionally, Nirvana will be issued on hi-res (96kHz/24bit) via a ‘Pure Audio’ blu-ray audio release. The blu-ray is stereo only affair (PCM, DTS-HD Master Audio and Dolby TrueHD) with no surround sound option.

The single vinyl LP comes with a download card for ‘MP3s’ (actually 320 KBPS MP4 AAC) but one advantage of opting for the 2LP 45RPM is that you get an upgraded download of  hi-res 96/24 files, although as the sicker notes (see above) the two tracks from Unplugged are CD-quality 44.1kHz/16 bit. It’s not clear at this point whether the blu-ray will offer the hi-res download or not, but it seems reasonably likely, particularly after the recent Grace Jones experiment.