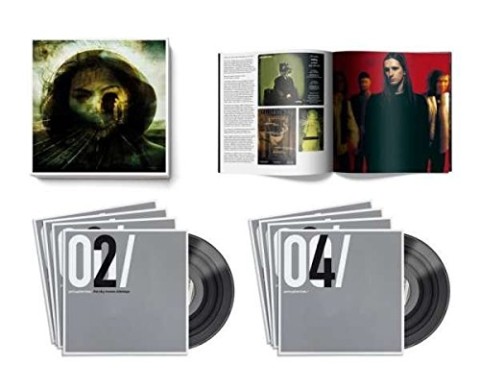 The band was formed in the late 1980s and became a fully-fledged touring group by the mid-1990s. This new box set contains 1995’s The Sky Moves Sideways which saw the group move more into the progressive rock sphere they later became known for. Follow-up Signify (1996) is the second double album in The Delerium Years. Coma Divine is the live triple LP of a sold out show in Rome, appeared in late 1997 and these three releases are accompanied by an LP of bonus tracks, including two versions of Signify II pressed as a concentric cut – depending on which groove the stylus falls into, you get a different mix.

All of the audio is pressed on 180g heavyweight vinyl and has been remastered by Steven Wilson over the last three years. The records come packaged in a deluxe box with 40-page book containing liner notes and a detailed band history by US journalist, Stephen Humphries. The box, book and LP packaging is designed by long-term collaborator Carl Glover and features new and previously unseen material alongside the original artwork from the era.

Availability around the world varies but the box is out now and appears to be cheapest via the Burning Shed store, which is the official outlet for Porcupine Tree (and Steven Wilson).

A – The Sky Moves Sideways:

B – The Sky Moves Sideways:

Steven Wilson on the return of Porcupine Tree

“My natural inclination is to not be a team player”