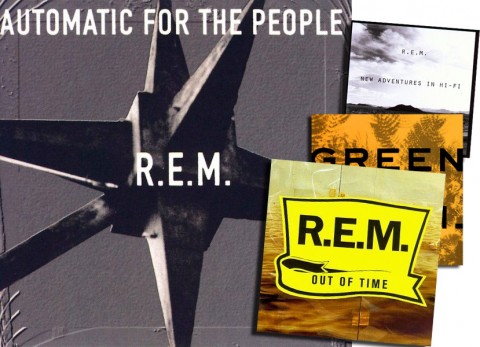 Bad news and really bad timing for Warner Bros., because as we approach the 25th anniversaries of R.E.M.‘s landmark Out of Time and Automatic For The People albums, the band (who split in 2011) have entered into a multi-year, worldwide licensing agreement with “leading independent music company” Concord Bicycle Music Company for those albums and in fact all their recording output spanning the years 1988 through 2011 (the Warner years).

This era resulted in album sales which are said to have reached 85 million across the globe and longtime R.E.M. manager, Bertis Downs said “The band and all at REMHQ are very happy to be joining with Concord Bicycle Music for this next phase of curating and extending R.E.M.’s recorded legacy,” adding,  “The albums covered by this agreement are some of the band’s most successful, both artistically and commercially, and we know the people at Concord share our enthusiasm about this partnership.  We leave the Warner Bros. family, a great label where we are certainly grateful for some of our career highlights. But moving forward, we knew this was the right time to change it up, and Concord is the right home for this key part of R.E.M.’s catalog.”

This deal sees R.E.M. working once more with Sig Sigworth (SVP Catalog Management & Development, Concord Bicycle Music) who worked with the group in the I.R.S. Records years. He commented: “I’ve had the good fortune to consult with the band on their catalog for the past several years, but to now, all these years later, be able to bring the band and their incredible post-I.R.S. legacy to the Concord Bicycle Music family is very rewarding.”. The irony won’t be lost on fans because the band left the ‘indie’ IRS but have now been snatched back from Warners by another ‘indie’ in Concord Bicycle Music.

“It was disappointing when the band left to go to Warner Bros.” was Sigworth’s understated comment in yesterday’s announcement which also confirmed that fans can expect “deluxe reissues with special bonus material, exclusive packaging and much more”.

Warners did reissue their R.E.M. catalogue back in 2005 with CD+DVD-A combo-packs which boasted some excellent 5.1 surround sound remixes along with some small elements of video footage, but the label arguably underplayed their hand and could have created more extensive sets at that time. To be fair, we were a quite a few years from a mature market for super deluxe edition box sets at that point in time. Green was reissued again in 2013 (for the 25th anniversary) but perhaps the writing was on the wall at that point, because that 2CD set was far from a serious archival exploration of the 1988 album.

Concord have worked successfully with Paul McCartney on some very well-presented archive reissues, so we will wait in anticipation to see what they come up with for the R.E.M. back catalogue.