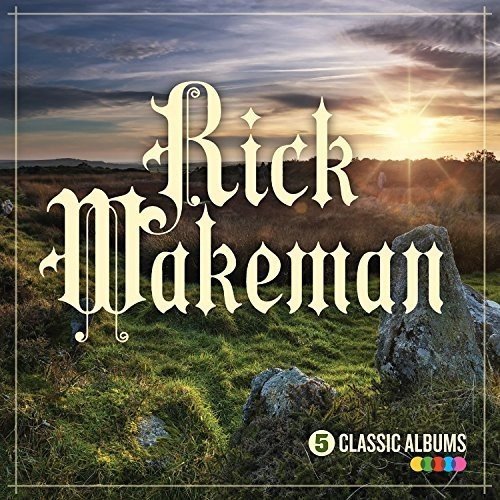 Get exactly what it says on the box, with this budget-priced reissue of five classic Rick Wakeman studio albums from Universal Music Catalogue.

Hot on the heels of Wakeman’s forthcoming Journey To The Centre of the Earth four-CD super deluxe box set recently previewed on SDE, comes a second May release of Wakeman’s music. Retailing at approximately a quarter of the price, this five-CD set kicks off with his debut long-player The Six Wives Of Henry VIII, a concept album he dreamt up while reading a book about the wives during a US tour with Yes. Peaking at number 7 in the UK album chart and sneaking into the top 30 Stateside on its original release in 1973, it was reissued in 2015 as extended edition with a Quadrophonic sound mix.

His second solo album, the aforementioned Journey To The Centre Of Earth, inspired by the Jules Verne novel of the same name and recorded live at the Royal Festival Hall on 18 January 1974, was an bigger hit, topping the charts in the UK, reaching number three in America and earning Wakeman an Ivor Novello Award and Grammy nomination.

This was followed by the lavishly titled The Myths And Legends Of King Arthur And The Knights Of The Round Table, which Wakeman started writing while in hospital recovering from a heart attack and ended up going gold everywhere from Brazil to Australia following its release in April 1975. Like Six Wives, this one also got the Quadrophonic mix/resissue treatment in 2015.

The 1975 soundtrack Wakeman wrote from Ken Russell film Lisztomania is omitted, and No Earthly Connection (1976) and White Rock (1977) account for the other two discs in this set. White Rock was the soundtrack to a documentary film about the 1976 Winter Olympics, and includes After The Ball a track which Wakeman had been specifically asked to write, but completely forgot to compose, and rather than admit that, pretended he had the song ready and recorded it in one completely improvised take. It turned out remarkably well and became a Wakeman staple.

So that’s that on the audio front and, as you’d expect for such an economically priced box set, the CDs are simply packaged in a slimline slipcase.

5 Classic Albums is released on 13 May

CD 2: The Myths And Legends Of King Arthur And The Knights Of The Round Table

CD 4: Journey To The Centre Of Earth