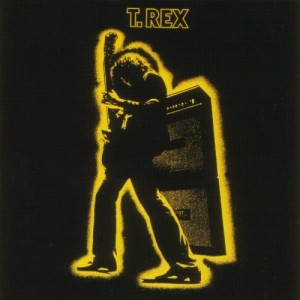 T-Rex’s classic Electric Warrior album will be reissued in a variety of formats on 23 April 2012. In addition to this, a special limited box set of singles is being produced especially for Record Store Day 2012 (21 April 2012).

The 2-disc Deluxe and the 3-disc Super Deluxe Editions will both include previously unreleased demos and out-takes – and original producer Tony Visconti’s re-mastered version of Electric Warrior.

The album is presented with  four bonus tracks – the non-album single, Hot Love (No. 1 in February 1971) plus the B-sides There Was A Time / Raw Ramp, King Of The Mountain Cometh and Woodland Rock.

The second disc in the deluxe and super-deluxe editions opens with Marc Bolan reciting a previously unreleased poem called The Electric Warrior which was recorded for a US Radio promo that is featured in full at the end of the album.

This is followed by an alternative version of the album comprised from previously unreleased demos and out-takes. In addition there are unreleased demos recorded in London and New York of a recently discovered untitled instrumental from the Hot Love sessions and a T. Rex cover of Carl Perkins’ rockabilly classic Honey Don’t.

The limited super deluxe edition will contain the two CDs plus a DVD of rare and unreleased TV performances and promos by the group, and a wealth of additional items – alongside a 32-page hardback book featuring a brand new essay from Bolan biographer Mark Paytress (this includes new interviews with those who were close to Marc).  The box also includes reproductions of rare photos and memorabilia: a poster including a timeline, three photographs, a coaster and a vintage press release.

The DVD includes the only two surviving Top of the Pops performances from the BBC archive of T Rex’s Electric Warrior-era hits – Hot Love and Get It On, the latter featuring Elton John. The DVD also includes the previously unseen Blue Screen versions of Jeepster and Life’s A Gas from Germany’s Beat Club plus the actual broadcast versions of Jeepster and Life’s A Gas. The rarely seen official promo videos for Get It On and Jeepster are also included, plus live performances of Girl and Cosmic Dancer which were recorded at the performance of T. Rex’s historic Wembley Empire Pool concerts on March 18 1972.  These were not included in the concert film Born To Boogie (which used none of the matinée concert footage).

Tony Visconti’s re-mastered version of the album will be released on vinyl for the very first time as a double LP.

More information when we have it.