This new issue will boast bonus features that include a full length ‘director’s commentary’ by Paul McCartney (the film’s actual director is officially ‘The Beatles’), a making of documentary and the promo of Hello Goodbye.

Magical Mystery Tour debuted on British television on Boxing Day 1967 when it was broadcast in black and white to a rather bemused audience. 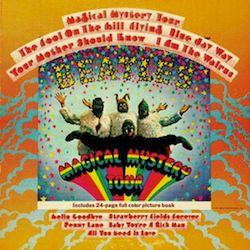