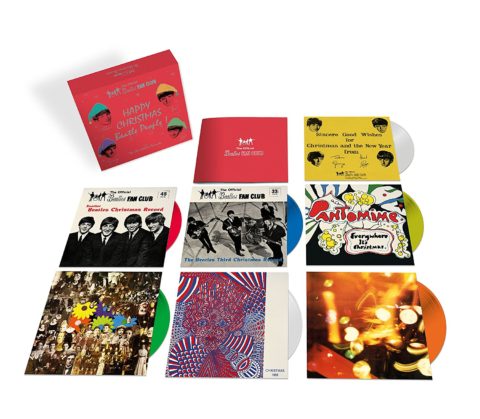 Apple Corps and Universal Music will issue a new Beatles box set just in time for this Christmas. The Christmas Records is a vinyl box set that features seven coloured vinyl records. Each 45 features the Fab Four’s original festive messages, which were issued every year to the fan club on flexi-disc.

The Christmas messages were very much an annual tradition and ran from 1963 to 1969. They are largely spoken-word with lots of larking around, although 1967’s does feature Christmas Time (Is Here Again), which if you are feeling generous you could describe as a ‘song’!

These Christmas messages have been newly pressed as seven-inch coloured vinyl singles for this new ‘limited edition’ box set. It also comes with a 16-page booklet with recording notes and reproductions of the fan club’s National Newsletters, which were mailed to members with the holiday flexi-discs.

The Christmas Records box set will be released on 15 December 2017. A vinyl picture disc of Sgt. Pepper’s Lonely Hearts Club Band will be issued on the same day.