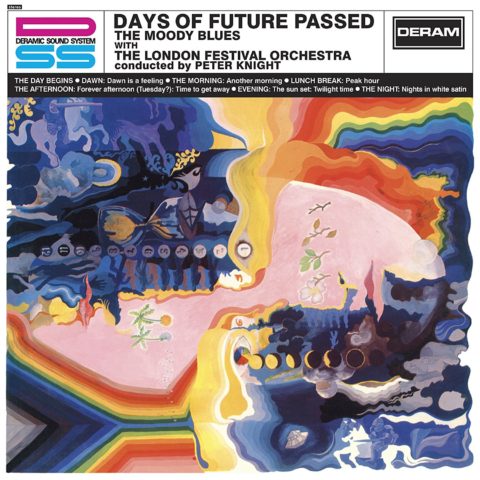 Universal Music are to put out a 50th anniversary deluxe edition of the The Moody Blues‘ 1967 album Days Of Future Passed.

The band’s second album was an orchestral rock concept album, and features their famous single, Nights In White Satin. It will be reissued as a three disc, 2CD+DVD set and one of the big selling point is the reversion to the very original 1967 stereo mix which was superseded in 1972 due to damage on the original master tape. All CD reissues have used this mix and not the ’67 original. Apparently, ‘technology’ has allowed the repair of the audio from the original tapes and so this original stereo mix gets its first CD release on this anniversary set. The first CD includes this and nine bonus tracks.

The second CD offers alternate versions and outtakes. In total this package has 33 audio tracks, which is seven more than the previous SACD/CD set.

The DVD element includes a 5.1 surround sound mix derived from the original 1972 Quad mix. Presumably, this is the same surround mix that was included on the now out-of-print 2006 SACD edition of this album. The original Quad mix was by Tony Clarke and Justin Hayward and John Lodge enhanced it for the 5.1 mix. This disc includes a hi-res stereo version and previously unreleased video footage of the band performing three tracks from the album at MIDEM on 24th January 1968, eight weeks after its release.

You do wonder why they haven’t opted for a blu-ray audio here, to allow for lossless 5.1 surround mix. Likely to be a budget-related issue since DVDs are cheaper to author and manufacture. Regardless, it’s certainly much cheaper than tracking down the previous SACD version.

November sees the release of this nine-disc Moody Blues box set that brings together,…