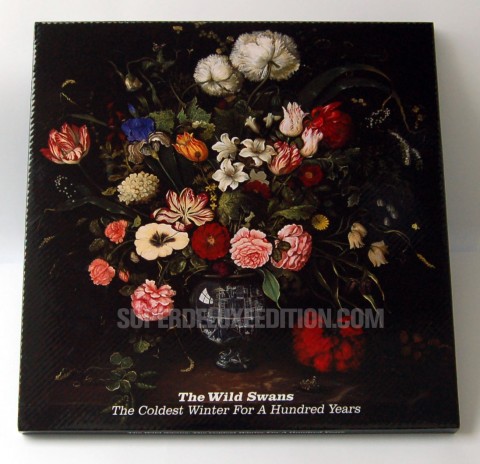 The Occultation label have produced a stunning deluxe vinyl set of The Wild Swans‘ 2011 album The Coldest Winter For A Hundred Years.

The band was originally formed by Paul Simpson, way back in 1980 after he left The Teardrop Explodes. However the original incarnation lasted only a couple of years. A second version of the band – that emerged in the late eighties – fared only a little better, producing two albums before Simpson, again, called it a day, somewhat unsatisfied with the results.

Fast forward to 2007, and Simpson declared his intent to ‘reboot’ The Wild Swans. He described the band as “unfinished business for me for over 20 years”.

The album The Coldest Winter For A Hundred Years was eventually released in 2011 but wasn’t issued at that time on vinyl. This new deluxe set addresses that, and also expands the original album with a series of bonus tracks on a second LP. These extras include the single versions of English Electric Lightning and Liquid Mercury as well as tracks from the Tracks In Snow EP, plus two previously-unreleased recordings.

The packaging has been created with care and attention. It’s refreshing to see something different, and the glossy outer box with the flaps at the rear is just that. It shows off the beautiful cover art (‘Camp’ by Ged Quinn) to great effect. The centrepiece of the contents is the gatefold double album. Inner sleeves include all the lyrics, even the bonus tracks and alternative art within the gatefold enhance the package.

A CD has also been included in this deluxe set, but rather than just shove something in in a plain wallet, Occultation have gone to the trouble of creating appropriate packaging for that too. So you get a proper card sleeve, and an inner sleeve with full credits. The CD contains all of the tracks on the double LP. The contents are completed by a poster, a badge, a postcard and a paper insert.

The Coldest Winter For A Hundred Years is a rather beautiful album – matched by the packaging of this deluxe edition.