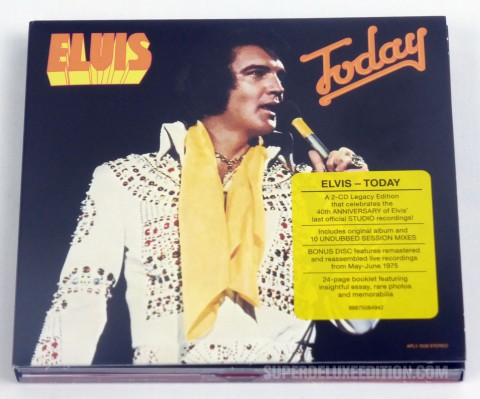 Elvis Today was never one of Elvis’s biggest selling albums. At best, it could only be called a mediocre hit, one which only managed to reach #48 in the UK album chart, and did even worse in the States.

Released at a time when the pop scene was swamped with the robotic sounds of Disco, and country music had become besotted with the countrypolitan age, perhaps it was no surprise that the first single from the album, a new rock song called T-R-O-U-B-L-E didn’t really have the impact that was hoped for, and yet it had everything going for it. As Stuart Colman notes, “Uptempo rockers that twinned a fifties feel with a contemporary lyric were by no means easy to come by at this stage of the game, and it suited Elvis to a tee.” In the UK, oddly enough, considering it was a return to everyone’s favourite Elvis style, it just missed the Top 30 and nowhere matched the success of his earlier ’70s hits. The second single in the States, Bringing It Back didn’t perform any better, but the second single in the UK, Green Green Grass of Home, a cover version of the Tom Jones chart-topper, was easily the biggest single from the album when it charted inside the Top 30 in November 1975.

In Britain, the release of Today was squeezed in between two compilation albums of old material. The first was the budget U.S. Male on Pickwick, and the other, was the mid-priced Sun Collection on the then new RCA Starcall label, which actually performed better than Today in the album chart. But that, perhaps, was no surprise and no accident. The recordings Elvis made at Sam Phillips’ famous studio in Memphis had always been among his most popular, and as this was the first time, they had all been placed on one album, it was almost written in stone that it would score well in the UK album chart. It peaked at #16 just two months after Today had been and gone and missed the Top 20 boat altogether.

Unlike those famous Memphis sessions 20 years earlier, Today was recorded over three nights between March 10 and March 12, 1975, at RCA’s Studio C in Hollywood, California, the same studio where Burning Love and Separate Ways had been laid down in 1972, and served as the rehearsal location for Elvis’s MGM movie Elvis on Tour that same year. Now, three years later, Elvis returned, armed with a recently won ‘Best Inspirational Performance’ Grammy for his 1974 concert version of How Great Thou Art, and some material for recording a new album. The result was one of the most diverse albums of his career with Elvis interpreting songs previously recorded by artists such as Don McLean, Perry Como, Billy Swan, Faye Adams, the Statler Brothers, Charlie Rich, The Pointer Sisters, and as already mentioned, Tom Jones. In some ways, the Today album was like Elvis’s first – made up of songs he chose and loved. But of course, to be fair, it was no first album, and neither was it an Elvis Is Back, His Hand in Mine or From Elvis in Memphis. It was, nevertheless, a fine album, and arguably one of his most underrated, and although some may dispute that, this 40th anniversary Legacy Edition goes a long way to prove otherwise.

Disc one features the entire original album plus 10 undubbed mixes from the sessions, providing an alternate mix of the album. Although previously issued on the 2005 Follow That Dream (FTD) edition, this is the first time these versions have seen the light of day on a commercial release, and with fans’ favourite, Vic Anesini, at the remastering helm, they are certainly an improvement on the sound quality of the FTD version. It is very refreshing to hear the unvarnished performances of these songs, in such good sound quality, and freed from the controversial “countrypolitan” overdubs that Felton Jarvis insisted upon for the original 1975 release. If you compare them to the more polished versions of the finished album, they certainly provide an entirely different listening experience. If there is anything missing from this new Legacy Edition, it surely has to be the 3-minute warm-up jam session of Tiger Man that was a highlight of the FTD edition. With a running time of 67 minutes on disc one, there was certainly room to fit it on as a bonus track.

Disc two features live performances from May and June 1975. Originally issued as The Concert Years in the 8LP Elvis Aron Presley 25th anniversary silver box set, in August 1980, it included, for the main part, Elvis’s show from Dallas in Texas on 6 June 1975. Originally recorded direct to cassette tapes from the mixing console for reference purposes only, it was never intended for record release in Elvis’s lifetime, and as such, it was necessary to replace damaged or missing songs from this show with other performances from the tour to present an album that mirrored a complete show. For this 40th anniversary Legacy Edition, the entire constructed concert, which includes a first-ever live performance of T-R-O-U-B-L-E, has been reassembled and remastered from the original sources, again by Vic Anesini, and thereby offers improved audio quality. And despite what some fans may think, these restored live performances provide the perfect companion to Elvis’s last official studio recordings, especially as they all come from the tour that surrounded the release of the album. Listen out for the drum roll on Hound Dog that echoes the original drum roll from the original hit, not often featured in Elvis’s live versions of the song in the 70s.

The packaging is the usual Legacy Edition presentation that we have come to love and respect. Like the previous On Stage, Aloha From Hawaii and Recorded Live On Stage In Memphis Legacy Editions, it comes in a six-panel digipak with decent front and back cover art reproduction, and is a huge improvement on the repro quality of the FTD edition which lacked definition and looked more like a third generation copy. Housed behind the discs are excellent repros of the T-R-O-U-B-L-E singles bag (even though it’s the B-side) and the QuadraDisc version of the album, which seems a bit of a waste as the cover art is exactly the same as the standard album release, as used on the digipak and booklet front covers. The obvious alternative would have been to include the picture singles bag for Bringing It Back or the UK generic RCA bag and label for Green, Green Grass of Home. Another option, of course, would have been to feature the cover art of the original 1980 sleeve or label from The Concert Years LP. It also seems a shame that Disc 2 doesn’t settle on representing the label of the original 1980 vinyl.

The glossy 24-page booklet features an excellent essay by Stuart Colman, who gives a solid historical narrative about the sessions and the songs, with some good footnotes to the not-so obvious, such as the story of the final mixing and overdubbing of the original album, recorded with musicians outside of Elvis’s usual live band, which would become a point of contention between Elvis and RCA to the degree that it caused Elvis, at one stage, to blow his top, and probably encouraged his decision about recording his future output either live in concert or in his home studio at Graceland. 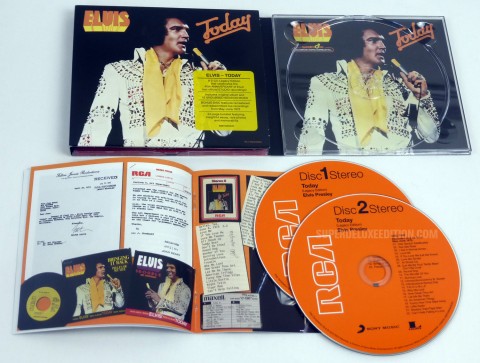 The booklet also includes a batch of first rate quality photos, many not seen before, and as was the norm for Elvis official photos and record sleeves during this time of his career, all are concert shots. For this release, we are treated to a number of various shots of Elvis in different jumpsuits and outfits that were taken during the tour of the bonus disc. There is also the usual batch of memorabilia that we have come to expect with Elvis reissues, and this booklet is no exception. Included are the usual record labels, sleeves, cassettes, letters and RCA ads. Once again there are no images from The Concert Years album, either front or back sleeve, the box or labels, and no repro of the UK singles. Although that may seem like a niggly point, their inclusion would have added to the completeness of what is otherwise an excellent anniversary edition of Elvis’s last official studio album and the collectible live recordings taped just a few months after the sessions.

The Today Legacy Edition is out now.

Review by Nigel Goodall. This review can also be found on Nigel’s blog. 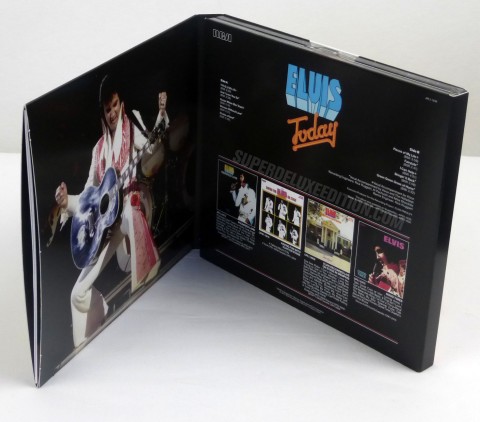 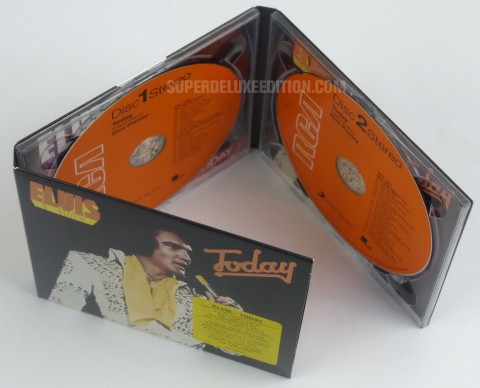 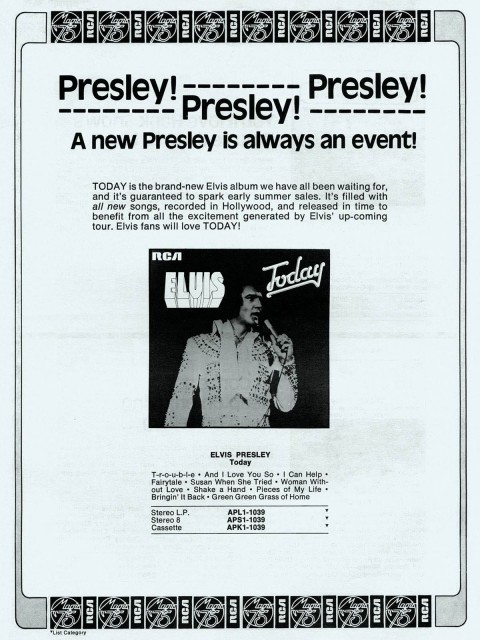