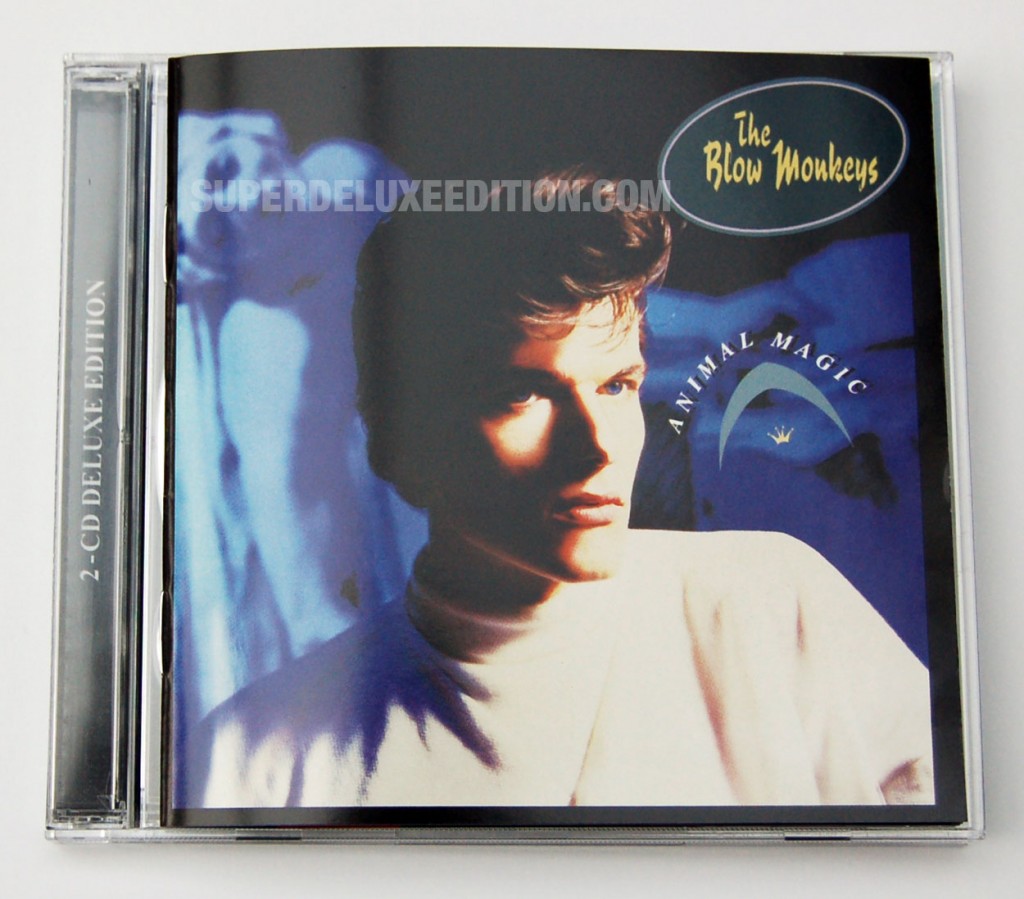 Cherry Red have this week reissued the first two albums from British pop band The Blow Monkeys, best known for their 1986 international hit Digging Your Scene.

The band, who reformed in 2008 after nearly two decades apart, are fronted by Dr. Robert (Robert Howard), who writes all the songs and plays guitar. Their 1984 debut, Limping For A Generation, saw them garner some positive reviews for their rather individual ‘jazz-punk’ sound,  and while early singles such as Go Public, Atomic Lullaby and Man From Russia didn’t trouble the charts, RCA saw enough promise to allow them to record a second album – 1986’s Animal Magic.

Limping is dominated by Neville Henry’s saxophone, but thanks to the arrangements and production of Pete Wilson (who worked on the early Style Council albums) it is essential and integral to the sound of the album, rather than being tacked on for the odd solo – as Duran Duran or Spandau Ballet used the instrument during this era. The songs on the album, are largely lyrically impenetrable, but it never seems to matter that you don’t really know what Dr. Robert is going on about – he sounds like he really means it.

Professor Supercool is an album highlight with the “you’re so beautiful, I’d like to take you home” refrain, and the slinky atmospheric Waiting For Mr. Moonlight is four minutes of spooky, jazzy intrigue. Go Public, which was the first single, is one of the more spikey, punky tracks, with the frantic bass of Mick Anker and a snarling vocal from Dr. Robert driving the song forward. Man From Russia (another single) is probably the most ‘traditional’ pop song in terms of structure and chorus melody, although its rather ‘up’ mood is slightly at odds with the rest of the record.

The best thing about Limping For A Generation is that it hasn’t dated at all – no DX7s or Linn drum machines branding it a product of the 1980s. It is a remarkably accomplished debut, with a high level of musicianship – it sounds great.

The reissue does a number of important things. Firstly, it restores the original cover which RCA, in their wisdom, changed for a 1986 re-release with a single picture of Dr. Robert in Another Country mode on the front. It also appends all the period B-sides to the end of the album along with a couple of remixes. Apart from a few live tracks, CD two is full of unreleased demos from the era – the entire album, plus a few of the B-sides. These are very well recorded and are early band arrangements, rather than Dr. Robert solo demos. An interesting ‘alternate’ version of the record for sure, although as with most demos once you’ve listened to them a few times, you wonder how often you’ll choose them above the standard studio album – nothing in demo form betters its studio counterpart.

The second album, Animal Magic (1986) exhibited a more soul-influenced sound, utilising female backing singers and distinctive horn arrangements in particular. This is very obvious on I Nearly Died Laughing, Wicked Ways and Don’t Be Scared Of Me.

Animal Magic is best remembered for the Digging Your Scene single. RCA saw the potential and encouraged Dr. Robert to travel to New York and get the song remixed by Michael Baker. The drums and bass were both replaced, giving it the contemporary ‘gated’ snare sound of the time, and undoubtedly helping with radio play (particularly in the US). The end result was a bit hit – it reached number 14 on the Billboard Hot 100, and peaked at number 12 in the UK. It remains a great pop song, but inevitably that treatment does ‘date’ the song, and the harsh metallic vibe of the remix is hard on the ears compared to some of the other production on the record. If you ever wondered how Digging Your Scene sounded before the remix, then this reissue answers that question because the bonus disc includes the original Pete Wilson Mix, which is previously unreleased.

Animal Magic has more variety than its predecessor – I Backed A Winner (In You) has a delightful barbershop harmony backing, and the album closes with the excellent Heaven Is A Place I’m Moving To, with Dr. Robert’s acoustic guitar to the fore and a heartfelt performance.

Like Limping, this reissue contains demos on the bonus CD, although we get a selection of six rather than the whole album. There are many remixes including three versions of Digging Your Scene (not counting the original mix) and two instrumental versions (Digging Your Scene and Wicked Ways). Although it looks comprehensive, not everything from the multi-formatted single releases of the day is here. Omissions include a remix of The Man From Russia which was on the Digging Your Scene ten-inch single and the ‘short’ single mix of Wicked Ways from the seven-inch release. In Cherry Red’s defence, both CDs for this reissue are full to capacity, so there is little they could do other than to lose something else, although The Man From Russia remix could have fitted on the end of either of the Limping reissue discs, which would have been a logical home for it.

In terms of the remastering, the sound on these discs is actually ‘quieter’ than our 2008 Japanese mini-LP versions and so they are much easier on the ears, although we did notice that Limping For A Generation has the channels reversed compared to the 2008 Japanese CD. A quick check confirmed that the new reissue is consistent with with the 1989 RCA Choices singles collection, and so the Japanese reissue is probably incorrect.

Both CDs come with excellent booklets featuring an interesting interview with Dr. Robert, although we missed the lyrics which were included with the original vinyl issues. The double-CD jewel cases are as fiddly as ever and both of ours are now broken. A digpack would have been preferred for the packaging.

Overall, Cherry Red have done a superb job with these reissues. Almost all entire officially released output for both albums is contained across the four discs, in addition to a host of unreleased demos and some treats from the archive such as the unissued original album version of Digging Your Scene. Although Animal Magic will get most of the attention, we hope that these releases encourage fans who got onboard the Blow Monkeys train in 1986, to seek out the pleasures of the earlier album. Limping For A Generation really is a treat.

Read our exclusive interview with Dr. Robert discussing these reissues

The Very Best of the Blow Monkeys

BMG’s Metro Select imprint are continuing with some newly compiled ‘best of’s, including this…