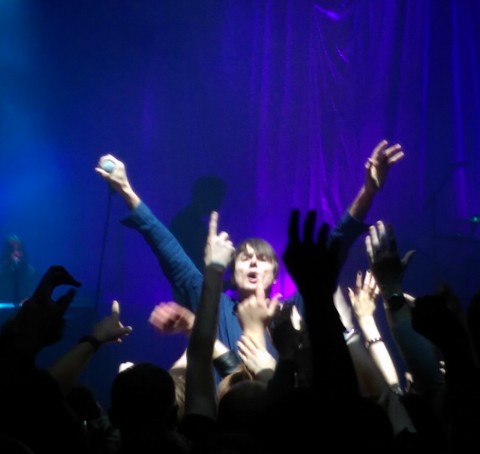 A fine evening last night in North London in the company of Suede as they played in what was The Town and Country Club in Kentish Town, but is now (unfortunately) called the O2 Forum (having previously been the HMV Forum).

The show was split in two, with the first part devoted to their new album Night Thoughts followed (after a brief interval) by 70 minutes of the audience shaking their bits to the hits.

I’m really enjoying the new record and after a 50-minute walk late in the evening last week with Night Thoughts as my soundtrack, I can confirm that it’s perfect listening in the dark, amongst the streetlights and wind of North London.

Back to the gig. The staging was simple yet effective, with the band playing behind a screen upon which Roger Sargent’s ‘feature film’, commissioned to accompany the long-player, was projected. At first I thought ‘hiding’ the band like this was rather self-consciously ‘arty’, but Brett and co. cleverly shone through the filmed visuals regularly, something that was stunningly effective when they appeared to be underwater at the beginning as the bearded protagonist in the film (cheer up, mate) was despairingly walking chest-deep out to sea, seeking some kind of watery redemption. Or as I commented to my companion, “he’s doing a Reggie Perrin”.

That jokey reference points to a deeper truth, which is that although doing the film was a pretty good idea, for me the visuals added a big fat zero to the enjoyment of the album and were strangely unengaging, although it was a decent enough spectacle in the live environment. Suede could learn a thing or too from Steven Wilson whose animations genuinely do add an extra dimension, and often an alternative narrative, to his music.

No matter, Night Thoughts is Suede’s most enjoyable, consistent and ‘playable’ album since Coming Up and hearing it live and in full, was a real treat, even if there was an embarrassingly loud amount of chatter at the back of the venue during the quiet bits (some people!) – presumably by a subsection of the audience who thought having to listen to the new album was a-price-worth-paying to get the hits (Brett would later make a jokey, but pointed reference to this by saying “you can talk about fucking Eastenders when you get home”).

‘Part two’ of the evening felt like an hour-long encore. The studied concentration of performing Night Thoughts was done with and Brett, Mat, Simon, Richard and Neil let rip with a 15-song sequence that kicked off with a quartet of classics: This Hollywood Life, Killing Of A Flashboy, Trash and Animal Nitrate. Wow. Brett was 100% committed to the task at hand and was clearly enjoying himself as he starting chatting to the audience, regularly diving in amongst the fans, much to the delight of the 2,300 capacity crowd.

Suede only played one track from 1999’s Head Music – an acoustic Everything Will Flow (“a good song from a bad album” said Brett) – and nothing from A New Morning. This was very much about the strength of the first three records, underlined by how relatively feeble For The Strangers (from 2013’s Bloodsports) sounded amongst the classics.

The clock clicked past 11pm as the band finished To The Birds but you don’t go into rock ‘n’ roll to respect curfews, so one final number – a rather loose, but ecstatic New Generation – closed a memorable evening.

In the pub afterwards we pondered how and why it all went so wrong for Suede – after just four years and three great albums it was all over, creatively. I wasn’t totally convinced after the ‘comeback’ record Bloodsports, but with the arrival of the genuinely immersive Night Thoughts, and last night’s live tour-de-force, Suede are truly worthy of all the plaudits being heaped upon them.