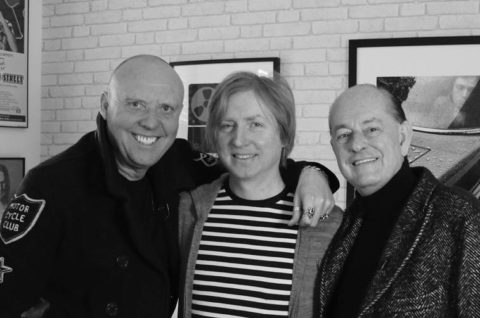 Fantastic week here at SDE HQ, the highlight of which was undoubtedly Martyn Ware and Glenn Gregory popping in to sign 450 SDE Heaven 17 interview booklets.

It’s very satisfying to see the spark of an idea from only a few weeks ago turn into a finished product that ends up being endorsed and supported by the artist. Martyn and Glenn are lovely people too, so I’ve learnt a lot about them and the band since we did the filmed interviews back in February.

All the pre-orders for the booklets have been shipped and we are sending out new orders daily. Not too many left now, so if you are interested remember you can only get these via the SDE shop.

The Play to Win box sets were released yesterday and there is a coloured vinyl edition of their 1996 album Bigger Than America due on Record Store Day next month. 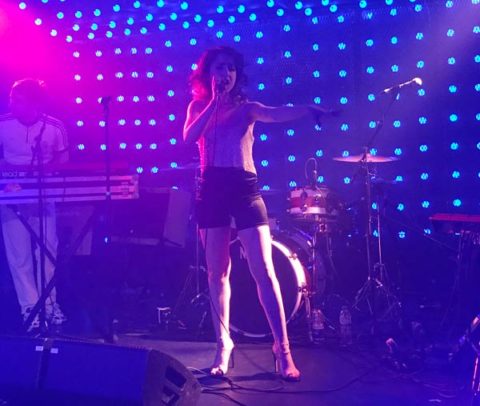 I know this site is primarily about reissues and box sets but that doesn’t mean I’ve lost all interest in ‘new’ artists. With that in mind I have to tell you about a new band I saw in Camden on Thursday night. I was with a mate primarily to see a band called Sophie and the Giants who are quite good, but rather derivative of Florence + the Machine. However it was the support act that caught my eye (or ear). They were Pristine Babe, an Italian duo, based in London, who performed some great numbers with superb early ’80s disco/pop production. Think Bobby ‘O’, that Colonel Abrams synth bass, early Pet Shop Boys and the like. I think they’ve only released two songs on Spotify, but one is this seductive charmer called Moonlight. To me it sounds like some kind of ‘lost’ classic from 35 years ago.

Singer Penelope was great fun, dancing wildly and joking with the audience. EVEN BETTER than ‘Moonlight’ was the song they ended the set with, which I think must be called ‘Destiny’. I filmed about half of it and you can watch the video of it (below) which I uploaded to twitter on Friday.

I saw a band with the brilliant name of 'Pristine Babe' last night in Camden. They had a superb early '80s pop/disco sound. Here's a snippet of their last song… pic.twitter.com/oFNm30rUGG

I’ve been following the feedback on Sting‘s new album My Songs and thought I’d offer my own thoughts on this forthcoming album.

While I’d almost certainly prefer new music or a reissue of early classics like The Dream of the Blue Turtles or Nothing Like The Sun, I have to say that a project like My Songs is still quite interesting to me. It’s much better than just trotting out another greatest hits –  which he could easily have done.

Although nowhere near as prolific, Sting in the last 20 years or so has been a bit like Elvis Costello, simply undertaking projects that have interested him, without being overly concerned with commerciality. So the 2013 musical theatre production The Last Ship was clearly very personal to him, but of only of limited interest to his massive fanbase, while the Lute-heavy Songs From The Labyrinth (2006) was never going to deliver mainstream appeal. Other albums such as Symphonicities (2010) or If on a Winters Night (2009)– were interesting, but of course didn’t deliver new Sting songs.

If that kind of activity has bugged you, then Sting has certainly turned things around recently. He’s been really productive with two new albums in the last three years. It’s a bit much to expect another brand new studio album so quickly. Yes, we can argue about the merits of the new material, but I thought 57th & 9th was solid without being outstanding but really enjoyed the album with Shaggy.

I’d love many of my favourite artists to do what Sting is doing here – re-record the old hits – so I for one am looking forward to hearing My Songs. It’s going to be a fun listen, determining what in the mix is new and what isn’t. Sting has written so many great songs and recorded many great albums, that it’s unrealistic to expect him to be matching the giddy heights of the late ’70s and 1980s, as he approaches his 68th birthday.

The one legitimate grumble is the lack of reissues. 2011’s 25 Years was the most boring and predictable retrospective EVER – Sting, his management and Universal Music appeared to put a lot of work into NOT including anything rare or interesting – and everyone in the whole world, except Sting, seems to agree that a Dream Of The Blue Turtles reissue is a GOOD IDEA.

My Songs will be released on 24 May. Read more about it here.