In a new feature, we ask a musician or ‘pop star’ to review a current reissue or box set. Here, Blow Monkeys frontman, Dr. Robert (aka Robert Howard), writes exclusively for SuperDeluxeEdition and reveals a lifelong fascination with Marc Bolan, as he reviews the super deluxe edition box set of T. Rex‘s The Slider. This is what he had to say…

It’s an expensive sumptuous box set this. Beautifully put together with nice little touches like rosettes, sew-on badges, demos, b’sides, outtakes and TOTP’s appearances. Any true Bolan fanatic would have heard and seen most of this stuff before… albeit expertly remastered. The new and interesting thing for me is the interview Bolan biographer Mark Paytress conducts with producer Tony Visconti.

Visconti was the enabler. It was his name that mysteriously appeared on all those T. Rex singles I bought as a young teenager… way before I had any idea what a ‘producer’ was.

I was 11 years old in 1972 when The Slider came out. Marc Bolan beamed out of our newly acquired colour TV like an apparition from a distant star. Multi coloured and solarised, like one of those monsters on Dr Who, except instead of hiding behind the sofa, I wanted to live in his world. Marc Bolan’s world. My world was only too real. The freezing Siberian Fens with its sugar beet factories, dykes and raised rivers. Bolan’s was a world I wanted to be in, but had no idea how to find. What Visconti reveals here is a world that was already falling apart.

The Slider was a tipping point for Bolan. The self mythologizing had gone into overdrive.. The outrageous name dropping (Dylan, Lennon). The Dutch courage (cocaine and brandy). He was at the top of his game, but was already desperately trying to cling on –  remember this was less than a year after Electric Warrior!

And yet the music still shines with a primitive rock and roll swagger. He recorded quickly and it shows. In a good way. That’s why it still stands up. He was one phenomenal rhythm guitarist with a freakish twist in his DNA that made everything swing. His music brought real joy and abandon to my life then ..and now.. and for that Bolan music will always have a connection to my heart. It opened my eyes .

There is a sadness here too. We all know what followed. Things moved so fast in those days. There was a vulnerability in his music and performances. His little coy side glimpses give it away. Its part of the magic. And there is laughter. Chariot Choogle! Even Metal Guru. It’s street poetry. He had dropped a lot of the Tolkien stuff by now and was writing pure Bolanese. Nobody else has ever come close. Brave and unique.

And then I would hear his music on the radio, or in a film, or on an advertisement and I’d smile to myself. I was right. He was special. In the end it’s about the music and his music, or the best of his music..the kind of music you find here on The Slider.. is as good as it gets. Some achievement. Thanks Marc.

The Slider super deluxe edition box set is out now. 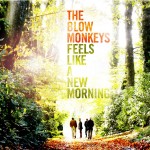 The Blow Monkeys reformed in 2008, after almost two decades apart, and a new album (Feels Like A New Morning) is due in spring 2013. The first two albums – Limping For A Generation and Animal Magic have also been recently reissued as 2CD Deluxe Editions.