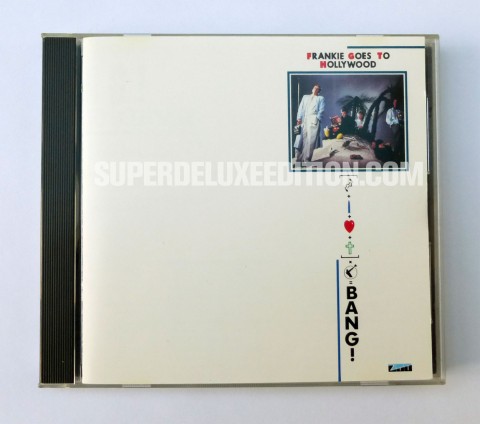 If you wanted to buy an ‘import’ CD or music release in London in 1985 there was only one place to go – Tower Records in Piccadilly Circus. A record store so cool that you didn’t have to leave the tube station to go shopping (there was an entrance within the station itself).

It was there that this unique Frankie Goes To Hollywood Japanese EP was purchased almost 30 years ago.

Bang!, as it is called, was very exciting for a number of reasons. The first was simply due to the fact that it was a CD. The format was still in its infancy at this point and the Japanese pressing complete with ‘OBI’ strip made it even sexier. The other great thing about Bang! was that it collected many great and rare versions of the Frankie singles, most of them making their CD debut on this release. Bang included all four of the hits from Welcome To The Pleasuredome along with War which was technically an A-side of Two Tribes for a while. Black Night White Light was the only true album track, and certainly one of the better non-singles from Pleasuredome.

Let’s talk about the remixes on this disc. War is the “Hidden” version as featured on the B-side of the twelve-inch of Two Tribes. It’s far superior to the album cut with an extended percussive intro which builds up nicely, layering instrumentation until that fat bass comes in. Definitely worth a mention is the excellent jazzy electric piano. It runs for just over eight and a half minutes. Superb.

Next up is Relax. There is no mention of it in the packaging but this is the ‘classic’ New York Mix. It wasn’t particularly rare (the 16 minute Sex Mix would have been a more interesting choice) but this does sound fantastic (everything on this disc is mastered beautifully).

The standard album version of Black Night White Light is followed by an eight minute version of Welcome To The Pleasuredome. Again, there is no reference to it in the packaging, but this is actually what has become known as the Urban Mix and incredibly, despite all the reissues over the years and decades, it’s still unique to this release. To be totally honest, it’s slightly dull with some rather boring monotonous instrumentation droning on for two or three minutes before the song proper breaks in. But hey, you need to own Bang! to officially have this version of the track.

The Hibakusha Mix of Two Tribes was the rarest of the twelve inch editions issued (supposedly only 5000 copies pressed) and so its inclusion here was very exciting back in the day. The sheen has been lost somewhat over the years as it has turned up regularly (it appeared on the 1995 CD reissue of Two Tribes and on the Twelve Inches compilation from 2001). The Power Of Love ends this CD EP and is the only track included in its familiar single/album version.

This boasts a unique cover design and retains the familiar typography and iconography of 1984 Frankie. Bang! also comes with lyrics to all the tracks (in English and Japanese), which were not provided with any of formats of the Pleasuredome album.

In short Bang! is a ‘must have’ for fans of ZTT and Frankie Goes To Hollywood. Despite all the multiple vinyl twelve-inch records and the cassingles with their unique mash-ups of familiar mixes, outside of very early CD pressings of the Pleasuredome album (which included the Annihilation version of Two Tribes) fans would have to wait until August 1986 and Rage Hard before any Frankie single was issued in extended form on CD in the UK.

If you owned Bang! back in 1985, the world really did feel like your oyster.