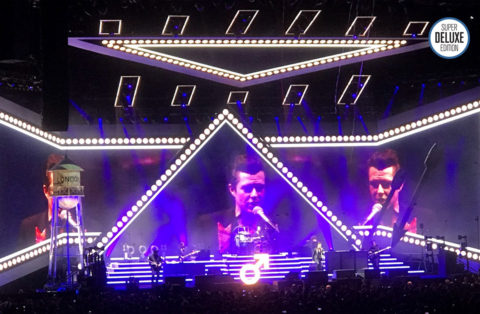 The Killers completed the first leg of their Wonderful Wonderful world tour last night as they entertained a capacity crowd at London’s O2 Arena with close to 120 minutes of hits and favourites from their five-album back catalogue.

Brandon Flowers’ frontman credentials were underscored with a strident performance and the 36-year-old was typically dapper and confident on a stage which was enhanced by an impressive and diverse lighting design (which often incorporated filmed backdrops).

The 23-song set opened with the title track of the new album (the melody of which is, in places, reminiscent in of Fleetwood Mac’s The Chain) before switching to more familiar fare like Read My Mind and Spaceman (from albums two and three respectively).

Brandon felt obliged to introduce the somewhat pedestrian Run For Cover to the crowd, another new track from Wonderful Wonderful, but top marks for the level of commitment – he sings every song as if it’s a classic you’ve been waiting all night for. Talking of which, he pointedly remarked that “we weren’t going to come across the Atlantic to London and not play Jenny Was A Friend Of Mine” and indeed they they didn’t… not play it. That song was part one of a mid-show Hot Fuss double bill, as they followed it with Somebody Told Me.

The shadow of their debut looms large over much of their subsequent output, and inevitably some of the newer tracks (such as Tyson vs Douglas) felt a bit ho-hum, although The Man has an undeniably bounce in its step. As we moved towards the end of the evening Flowers endearingly told of how in the early noughties he was into Hunky Dory and Transformer and “working in a casino and…trying to copy Lou Reed”. This led to him writing All These Things That I’ve Done. It’s a mark of how strong When You Were Young is that it followed that track, officially topping the bill (pre-encore). 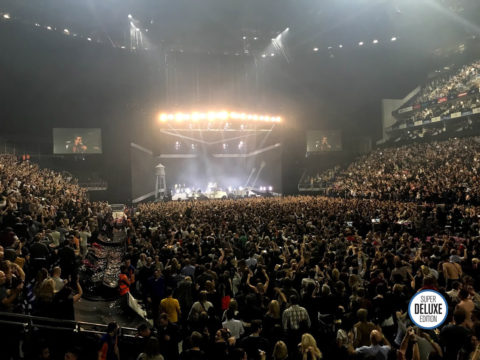 Appropriately enough, the lights came on during Mr Brightside

At that point, Brandon asked the crowd “Do you like treats? We’ve got one…” before introducing New Order’s Bernard Sumner to possibly the worse reaction I’ve ever seen to a ‘special guest’ at a rock concert! ‘Muted’ would be putting it politely. The level of noise in the concert hall didn’t change at all. What followed was a rather shambolic version of New Order’s Bizarre Love Triangle delivered to 20,000 people who wanted to hear Mr Brightside!

Okay, they did do that song at the very end (after Human) but Brandon’s brief diversion from rockstar to fanboy was a rare misstep in a show that ranged from solidly entertaining to exhilarating, despite the soulless corporate air hanger that is the O2.

‘Leg 2’ of the Wonderful Wonderful world tour continues in American in January. The new album is out now.