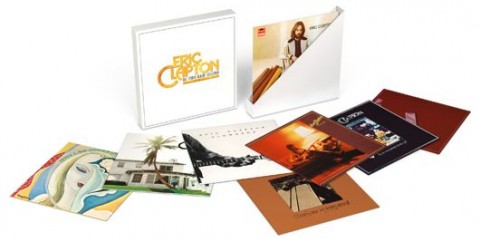 Eric Clapton‘s solo output, recorded for Polydor/RSO during during the 1970s, is gathered together in The Studio Album Collection, a new nine-LP vinyl box from Universal Music.

The box includes seven solo albums starting with 1970’s Eric Clapton and ending with 1981’s Another Ticket. The two ‘biggies’ are obviously present and correct (1974’s 461 Oceaon Boulevard and Slowhand from ’77) and by playing loose with the definition of ‘solo’ (i.e. ignoring it) the label also find a place for Derek and the Dominoes‘ 1970 masterwork, Layla And Other Assorted Love Songs.

The albums are reissued on 180g vinyl, in replica original artwork and this box has an inner ‘drawer’ that contains the records, slotting into the outer slipcase.Additionally, and “especially for this box set”, both Layla And Other Assorted Love Songs, and Clapton’s self-titled 1970 album, have been newly remastered. This implies that the rest use whatever the latest masterings might be. There is no word or digital v analogue masterings, so I guess we should assume the latter. This box also includes a download code for each of the albums.

The Studio Album Collection is released on 29 Jan 2016.

The box set includes the albums: