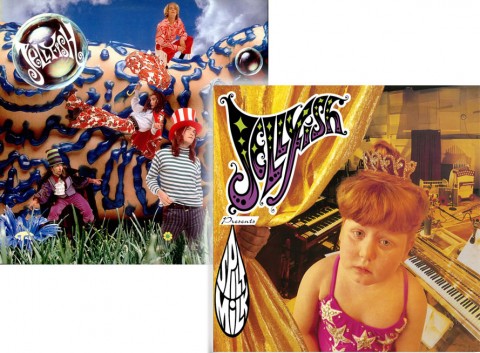 Omnivore Recordings in the US are preparing deluxe editions of the two Jellyfish albums for release in May.

Contrary to the information in the early Amazon pre-order listings, Bellybutton (1990) and Spilt Milk (1993) will both be two-CD sets and will offer an abundance of bonus material, largely made up of demos and live tracks. Expect around 80-90 minutes of extra audio for each reissue.

Shortly after it was originally issued, Bellybutton was re-released in the UK as a ‘special edition’ which added five live tracks (most of which had appeared on the UK CD singles) and Spilt Milk-era demos like Watching The Rain and Family Tree were commercially issued on The Ghost At Number One singles (further demos appeared on the New Mistake single).

The four-CD Fan Club box set (issued by Not Lame Recordings in 2002) is the most sought after Jellyfish collection, with an enormous amount of material (demos, live tracks) not found on any other release. Omnivore plundered this for 2012’s Live At Bogart’s so it is highly likely that Fan Club will be a ‘pick ‘n’ mix’ selection for the bonus tracks on the reissues.

Jellyfish originally featured Andy Sturmer (vocals/drums), Jason Falkner (guitars, bass, vocals) and Roger Manning (keyboards, vocals). Although Bellybutton lacked any big UK hits, all four singles did penetrate the top 75, with Baby’s Coming Back also reaching number 62 on the Billboard Hot 100. By the time of the more elaborate Spilt Milk, Falkner had departed and Tim Smith was brought in for bass duties. The band split in 1994.

Omnivore will release in these in North America and Canada, while Universal will issue the same sets in UK and Europe. These are slated for 6 May but this is likely to be approximate at this stage. Will we bring you the full track listings soon.