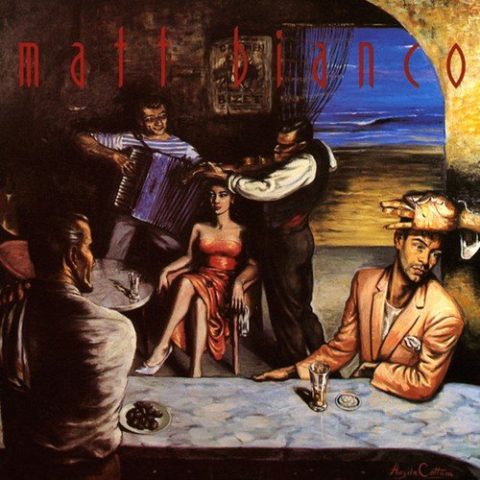 Cherry Red are to reissue Matt Bianco‘s eponymous second album as an expanded deluxe edition which offers a disc and a half of bonus material.

Released in 1986, Matt Bianco was the follow-up to the band’s ’84 debut, Whose Side Are You On. Basia and Danny White and had departed by this point, to focus on Basia‘s solo career, leaving frontman Mark Reilly to recruit singer Jenni Evans and keyboard player and writer-producer Mark Fisher to keep the outfit going. The Matt Bianco album spawned a number of singles, with UK number 13 hit, Yeh Yeh, the best known.

The audio for this reissue has been remastered and in total this double-disc package delivers 21 bonus tracks, including instrumental mixes, dub mixes, mega-mixes, and a handful of live tracks. Of these 21, we are promised four previously unreleased and 13 issued on CD for the first time.

The reissue strays from the brief slightly, by including Mark Fisher’s solo single from 1985 –  a song called Love Situation (with vocals by Dotty Green). Five versions of it are appended to the second CD.

This comes with a 20-page booklet with lyrics, photos, discography and new sleeve notes with contributions from the likes of Mark Reilly and Phil Harding.

The Matt Bianco 2CD deluxe edition is released on 27 October 2017.

Matt Bianco / Whose Side Are You On / two-disc deluxe edition

Get up, get out of your lazy bed for Cherry Red Records’ forthcoming release…