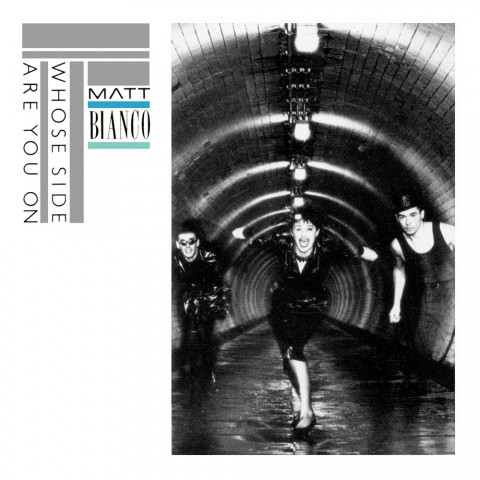 Get up, get out of your lazy bed for Cherry Red Records’ forthcoming release of the first-ever remastered, expanded edition of continental-Latin-Jazz-pop combo Matt Bianco’s debut album.

Whose Side Are You On, originally released in 1984, went platinum in the UK and yielded five singles, most notably the Top 30 hits, Get Out Of Your Lazy Bed, which reached number 15 in the charts and Half A Minute, which peaked at number 23.

At the time Matt Bianco were a trio consisting of keyboardist Danny White and Mark Reilly and Basia Trzetrzelewska sharing vocal duties. When Basia left the group, Reilly fronted the band alone and they went on to enjoy further UK hits with the singles Yeh Yeh’ (number 13) in 1985 and Don’t Blame It On That Girl (number 11) in 1988.

However, that was but a mere trifle compared to Trzetrzelewska’s success as a radio-friendly smooth jazz solo artist in the United States. In the late Eighties and early Nineties, wisely keeping her consonant-rich surname on the down-low, she clocked up sales in excess of six million Stateside known simply as Basia. Indeed, the successful recent reissues of her albums Time And Tide and London Warsaw New York encouraged Cherry Red to give her former band’s debut the deluxe treatment.

This two-CD edition features 33 tracks in total – the original ten-song album plus 23 bonus tracks including all the single versions, b-sides, remixes, and alternate versions that were released during the promotion of the original album. There are 14 tracks that have never appeared on CD before and seven that have never been released before – six demos and a brand-new recording of Half A Minute.

Whose Side Are You On is released on 17 June. Thanks to the new Price Comparison Tool below, you can see that (at the time of writing) Amazon UK is offering a fantastic price for this two-CD set.

Whose Side Are You On: Deluxe 2CD Edition (Jewel Case)