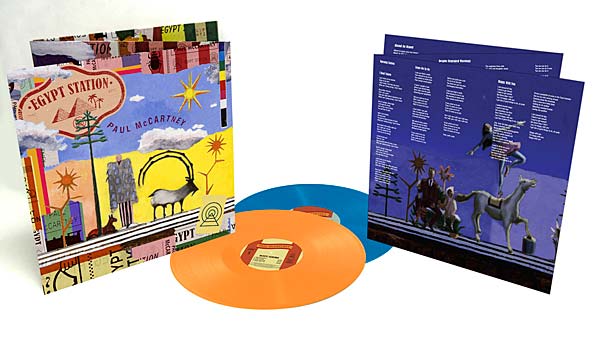 As you can see (click on the image to enlarge) this comes with blue and orange 180g vinyl records and is a “concertina gatefold package” with a fold out insert. This deluxe packaging is available as a double black vinyl as well (the standard 2LP black vinyl is two records in a non-gatefold sleeve).

This package is exclusive to Paul McCartney’s official channels (uDiscoverMusic etc.) although the black vinyl is widely available. Since SDE last updated you about the various Egypt Station formats MPL have pulled the single LP coloured vinyl, which appeared to be an error. So there is only one coloured vinyl edition and it’s this double LP set.

We still have no idea what will be in the super deluxe edition box set, but you’ll be the first to know once SDE has it confirmed.

The £40 price tag for this double vinyl set has raised eyebrows and MPL still haven’t officially released a track listing for the album which is out in less than a month, although the box set will almost certainly arrive later in the year.

Egypt Station will be released on 7 September 2018.