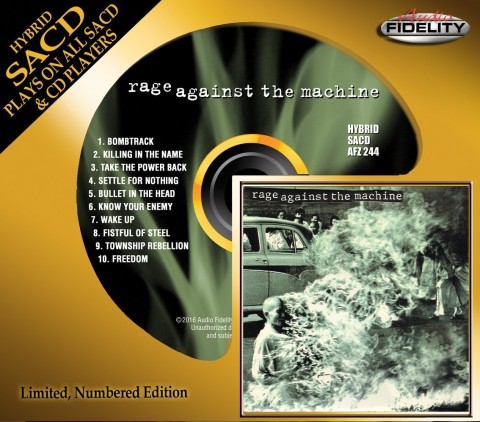 Audiophile specialist Audio Fidelity will reissue Rage Against The Machine‘s debut album as a ‘limited, numbered edition’ on the SACD format in June.

The stunning 1992 long-player has been remastered and as with all these releases, this is a ‘hybrid’ SACD meaning that even if you don’t have an SACD player the standard ‘redbook’ CD layer will play on all machines so you can enjoy the remaster at least. If you have the hardware then the SACD layer will boast a hi-res stereo version of the remastered album.

Sony issued 20th anniversary ‘XX’ editions of this back in 2012.

This Audio Fidelity SACD edition will be released on 17 June 2016.

Rage Against the Machine

Rage Against the Machine

REM‘s Out of Time reissue is due in November, but to give to you…