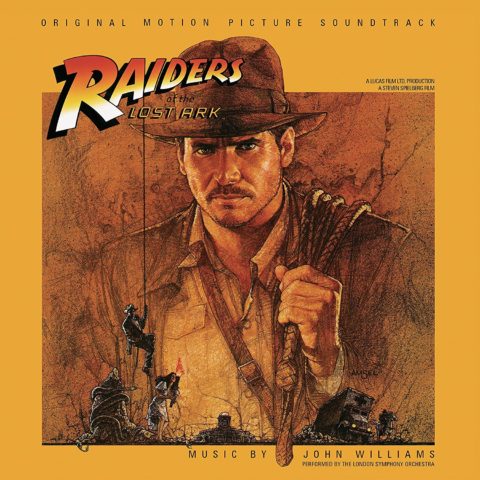 This 2LP vinyl edition of the Academy Award nominated soundtrack echoes the 20o8 expanded CD and offers around 30 minutes of extended cues not on the original LP and new to the vinyl format.

This is presented as a gatefold vinyl package with original stills and artwork from the film (thankfully, it’s not called “Indiana Jones and the Raiders Of The Lost Ark”!). It has been cut by engineer Bernie Grundman (who mastered the score for its original release) and pressed at RTI in California.

This vinyl edition of Raiders Of The Lost Ark Original Motion Picture Soundtrack will be released on 2 June 2017.

A1. In The Jungle
A2. The Idol Temple
A3. Escape From The Temple
A4. Flight From Peru
A5. Washington Men / Indy’s Home
A6. A Thought For Marion / To Nepal
A7. The Medallion
A8. Flight To Cairo

B1. The Basket Game
B2. Bad Dates
B3. The Map Room: Dawn
B4. Reunion In The Tent / Searching For The Well
B5. The Well Of The Souls