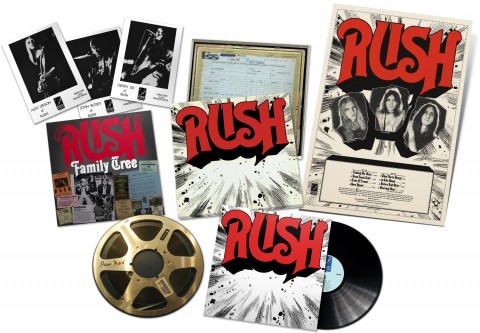 Rush released their self-titled debut in March 1974 and to mark this 40th anniversary, Universal Music will celebrate with a vinyl box set, reissuing the original Moon Records (pre-Mercury) release of Rush, as part of their ‘reDISCovered’ vinyl series.

If you are familiar with the Nick Drake vinyl box sets, you’ll know what to expect: a sturdy box with lift-off lid, audiophile quality remastering (by Sean ‘Beatles remasters’ Magee at Abbey Road), heavyweight vinyl (this is actually a 200g pressing) and various other goodies including, in this instance, a large reproduction of the first Rush promo poster, three lithographs, a Rush ‘Family Tree’ poster, and a digital download card (no confirmation of download format at the time of writing).

This Rush ReDISCovered vinyl box is released on 14 April 2014.

Canadian rock band Rush will celebrate the 40th anniversary of their fifth studio album, A…