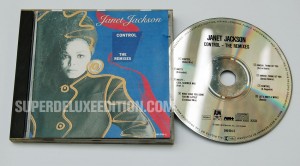 There seems to be a few different versions Janet Jackson‘s Control The Remixes – different cover art, different track listings. This is the eight-track CD that doesn’t have any versions of The Pleasure Principle on it. It also has the “Cool Summer Mix (Part 1)” of Nasty, not Part 2. A nice find to go with the Japanese issue of the standard Control album that we found in May. 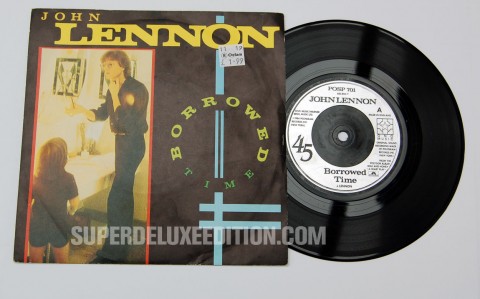 Borrowed Time was the second single from the posthumous John Lennon album Milk and Honey (released in early 1984). Despite the poignancy of the subject matter, the charming, but slight track, didn’t stand a chance against the big hitters in 1984 (Frankie, Wham!, Duran Duran) and it limped to number 32 in the UK charts. The B-side is a Yoko Ono song called Your Hands.

This was a nice find. An original 1977 UK pressing of ELO’s Out Of The Blue on blue vinyl. This is a Jet Records release (JETDP 400) packaged in a gatefold sleeve and it also comes with a poster. 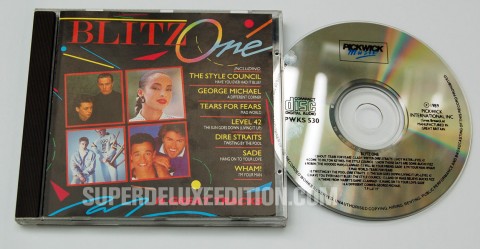 We have to admit that we’ve got a bit of a ‘thing’ for weird budget CD compilations from the 1980s. This 16-track offering called Blitz One was issued on Pickwick International in 1989 on behalf of the National Autistic Society. It’s apparent claim to fame is that it has two tracks from eight different artists. So track 1 is Shout by Tears For Fears, while track 9 is Mad World, by Tears For Fears. Track 7 is I Will Be Your Friend by Sade and track 15 is Hang On To Your Love by… well, you get the idea. The people who compiled this do use a bit of poetic license by including I’m Your Man by Wham! and then A Different Corner by George Michael. Fine, he wrote both songs, but hey, Wings and The Beatles aren’t the same artist are they? Not sure why it was called Blitz One, surely something like ‘It Takes Two‘ or hell, ‘Blitz Two’ would have made more sense. 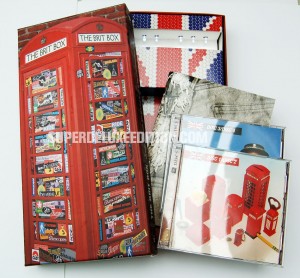 This really was found in a charity shop (honest, guv) and it has to be the daddy of all CD boxes. The Brit Box from Rhino is a four-CD box set from 2007 that has working lights!! Yes, if you click on the image above, you’ll see the lights. There is a switch at the back of the box and the idea is that you turn it on and put the telephone box lid back on. The light flickers on and off shining through the top of the ‘telephone box’ illuminating the sign which reads ‘The Brit Box’. Gimmicks aside, this is actually a really good compilation, clearly targeting the American market with mainly UK Indie/Britpop type content. Artists include Suede, New Order, The Boo Radleys, Pulp, Menswear, Supergrass, The Jesus and Mary Chain, The Primitives, and Primal Scream. 78 tracks in total. Hopefully all the imagery is ironic, because it’s all rather unpalatable if you are a Londoner –  Beefeaters, red telephone boxes, baked beans, tea bags and ash trays(?). Comes with a really good 80-page booklet. 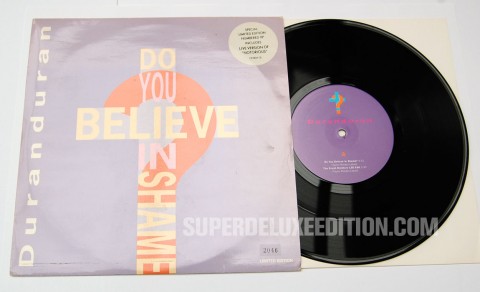 The last single from Duran Duran‘s underrated Big Thing album. Do You Believe In Shame was released in loads of formats in the UK including a triple-pack seven-inch single and a little three-inch CD single, but not, curiously enough, as a twelve inch vinyl record. This features The Krush Brothers LSD Edit – which combines an edited version of The Edge Of America with Lake Shore Driving – and Notorious live from the Strange Behaviour tour of 1987. It doesn’t include God (London) or How A Road Gets Made which were on some formats. 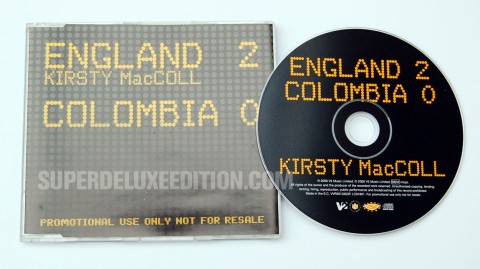 This was never actually released as a single from Kirsty MacColl‘s last album Tropical Brainstorm (issued in 2000). The promo includes the album version and a radio version, of which the latter is presumably unique to this CD. 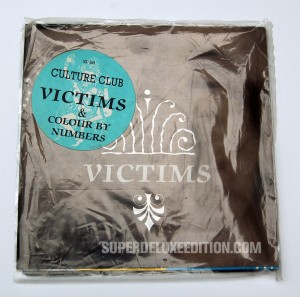 It looks like a T-shirt, but this is actually a seven-inch poster-bag of Culture Club‘s eighth UK single Victims. One side of the massive poster is a not very appealing picture of Boy George and Jon Moss (in American football gear), but the other side is that great moody black and white shot that was the cover of Victims. Even so, the poster bag seven-inch single was always a bit of a flawed concept, because if you actually used the poster, you’re left with a naked sleeveless vinyl single, in a see-through plastic bag. 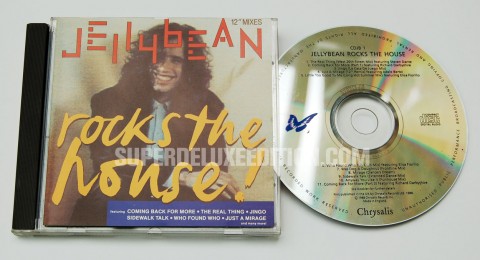 A collection of twelve-inch remixes from Madonna’s ex-boyfriend Jellybean, including Who Found Who (US Club Mix) and The Real Thing (West 26th Street Mix). 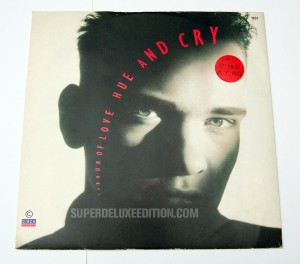 “I don’t need your pseudo satisfaction, baby!” Labour Of Love was the second Circa Records single for Scottish duo Hue and Cry after debut, I Refuse, flopped. It reached number 6 in the UK and would be their biggest hit of their career. The sticker on this twelve-inch boasts ‘12″ Single at 7″ Price’ but what ‘they’ don’t tell you is that you’re not getting the twelve inch version of the song, it just plays the seven-inch version. And YES there was a remix – the excellent ‘Version Superbad’ (runs for 6.25) was on the cassette single and a ten-inch vinyl version. This twelve-inch also comes with a poster, which was a pleasant surprise. Having said that, do you know anyone who wants to put a Hue and Cry poster on their wall in 2013?

Hue and Cry trivia > With Labour of Love in the UK top ten, Hue and Cry were ‘big’ enough to be asked to support Madonna when she played Roundhay Park in Leeds on her Who’s That Girl? tour.

It’s that time of the month! We’ve been shopping for used records. Here’s what…