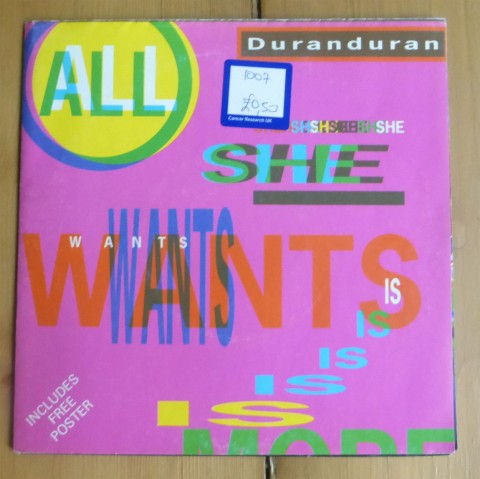 I love All She Wants Is. The second single from 1988’s excellent Big Thing outperformed the more commercial sounding lead 45 I Don’t Want Your Love, and by peaking at number 9 in the UK, kept up Duran Duran’s record of having a top ten single from each studio album (Liberty would soon ruin that).

This is Duran Dur 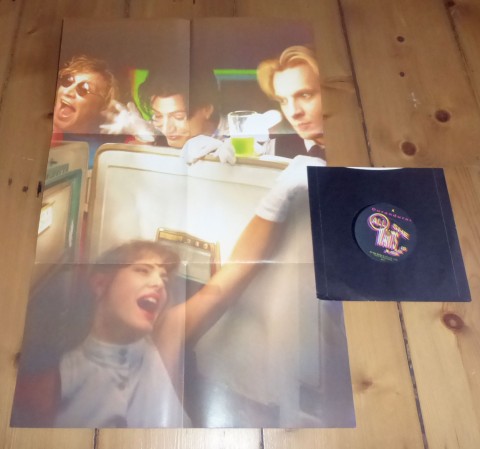 an not worrying about the ‘duran sound’ and just going with the flow. Embracing ‘dance’, silly haircuts and coming up with something quite original. I remember being semi-obsessed with the various 12-inch singles at the time (US Master Mix, Euro Dub Mix, Latino Dub etc.) and the different artwork.

This is a UK poster sleeve seven-inch (DDP 11) which includes the 45 mix on the A-side and what I regard to be Duran Duran’s best B-side by some margin, I Believe/All I Need To Know (medley). An unedited ‘full version’ of this track appeared on the 2010 Big Thing deluxe edition. 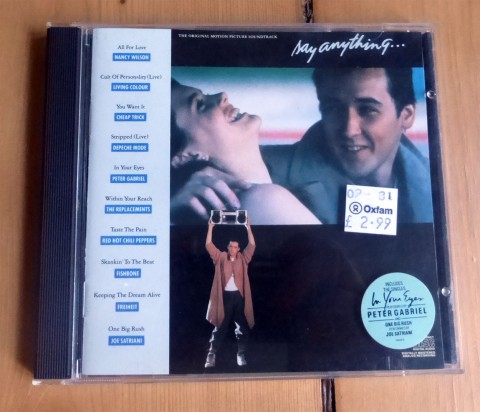 I haven’t actually seen this 1989 film, Cameron Crowe’s debut feature, but I’m a sucker for 80’s movie soundtracks. Not a bad selection, including Peter Gabriel‘s In Your Eyes, Depeche Mode‘s Stripped and Freiheit‘s Macca-esque Keeping The Dream Alive. Still has the original round sticker on, as you can see from the photo. 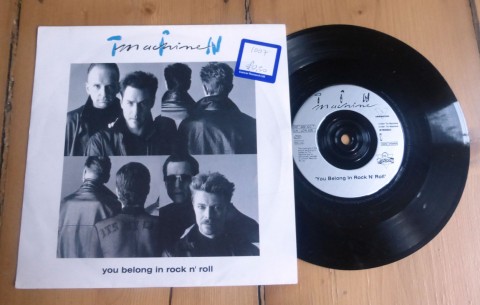 “You belong in rock ’n’ roll and SO DO I…” You gotta love David Bowie’s lyrics and delivery on this first single from the second Tin Machine album. This was issued in August 1991 (but recorded before the Dame’s Sound+Vision tour) and debuted more refined and varied sonics when compared to the no frills first album. It turned out to be the band’s biggest UK hit, despite peaking at a lowly 33. Although to put some perspective on this and to understand Bowie’s commercial standing at this time, the man’s first solo single in five years – the Nile Rodgers produced Real Cool World – was issued a year later and performed even worse, stalling at number 53. David put some effort into promoting You Belong in Rock ‘n’ Roll, appearing on Wogan and Top of the Pops. 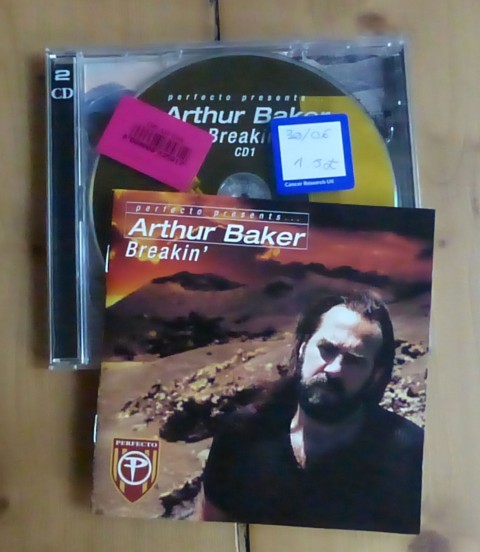 Fans regularly ask when we will see a deluxe edition of Fleetwood Mac’s 1987 album Tango In The Night. The reason they ask this is because the singles were packed with masses of non-album material, primarily remixes;  ‘extended vocal remixes’ or ‘bonus beats’ etc. If you want a reminder of what a deluxe of this album might look like check out this post.

The best single from Tango in the Night was Big Love and across there various formats were many, many remixes by Arthur Baker. I actually thought they were all unreleased on CD until I came across Breakin’ in Cancer Research UK, a two-CD Arthur Baker remix compilation that features Big Love (House Upon The Hill Mix). I don’t think there is actually a mix of that name at the time (some of the singles boast a short House On The Hill Dub), and close examination reveals that this is actually the 6.42 ‘Extended Remix’. It has a slight edit at the end chopping off about 20 seconds and the track semi-segues into Breaker’s Revenge, the next track on this compilation. The mastering is also horrendously loud. I suppose this could be a vinyl rip, but it’s hard to tell due to cranked mastering. 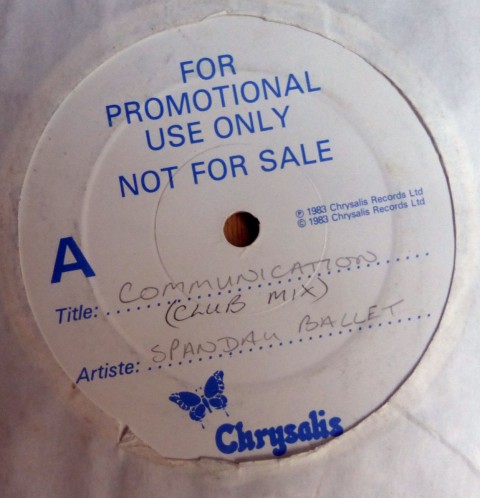 I’m a sucker for a promo. The possibility of discovering some unheard, unreleased mix, is quite exciting, aside from the general collectibility. This twelve-inch of Spandau Ballet‘s 1983 hit Communication has a generic Chrysalis promo label with the details handwritten. One side has the ‘club mix’ and the other the standard album version. This is identical to the released version, so I was a little bit disappointed, if I’m honest. When I bought this, the person in the charity shop apologised and said the 99p label was from a previous charity shop. I asked how much it was then, and she replied ‘a pound’. Oh, go on then! 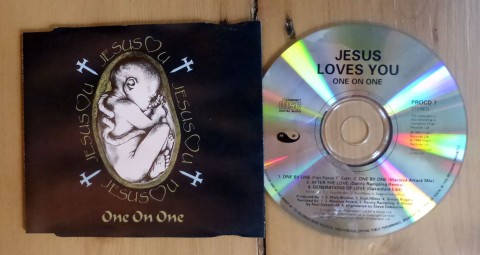 Bow Down Mister is the track most people remember from Boy George‘s Jesus Loves You ‘collective’ and One On One was actually the single released before that, which failed to crack the UK top 75. This four-track CD-single includes the ‘Fon Force 7″ Edit’ and ‘Massive Attack Mix’ of the title track, as well as the Danny Rampling Remix of debut single After The Love AND the ‘Oakenfold Edit’ of the Generations of Love, which would be issued as a single after Bow Down Mister. Almost a mini greatest hits. 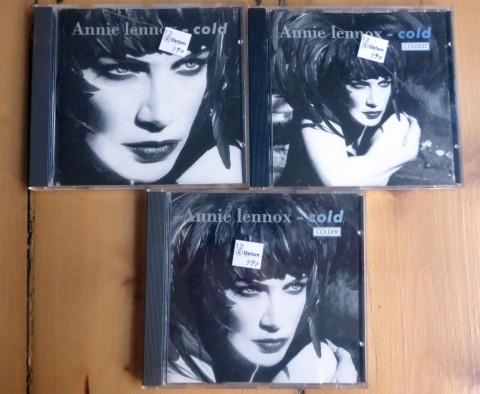 If you want to understand the attraction many of us have to CD singles, look no further at Annie Lennox‘s fourth single from her first solo album Diva. This was originally released across THREE CD singles, with jewel cased CDs offering three extra tracks recorded at MTV’s Unplugged. So yes, that’s effectively an complete Unplugged album! I found one of these in Oxfam, and thought ‘great’. A few minutes later came across a second and thought ‘please let the third CD be here’. After a bit more hunting, lo and behold there is was. Result! Especially at 99p each. The extra Unplugged tracks are as follows: Why, The Gift, Walking On Broken Glass, It’s Alright (Baby’s Coming Back), Here Comes The Rain Again, You Have Placed A Chill In My Heart, River Deep Mountain High, Feel The Need, Don’t Let Me Down. 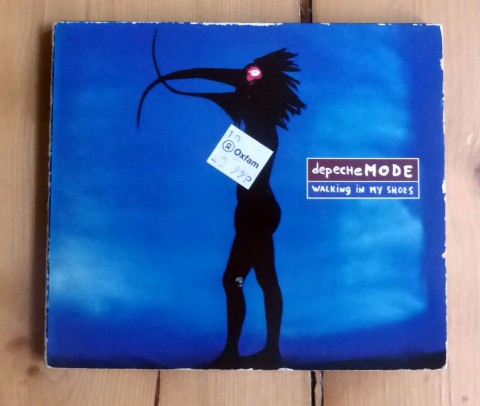 The second single from Depeche Mode‘s 1993 album Songs of Faith and Devotion, this Walking In My Shoes CDS was one of two CD singles issued at the time. The other disc (LCDBong22) was more of a ‘mix’ CD and included the 6.53 ‘Extended Twelve Inch Mix’. This (CDBong22) has the ‘seven inch mix’, the ‘grungy gonads mix’ and two versions of B-side My Joy. Comes as a single panel digipack. 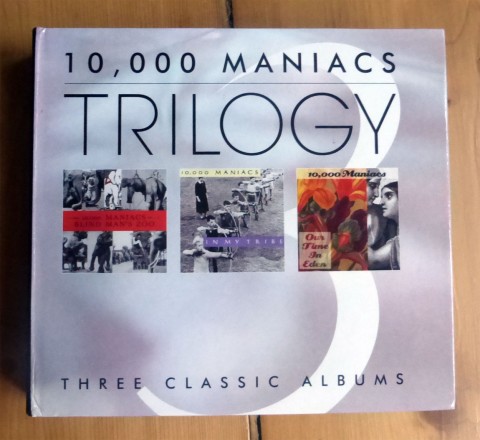 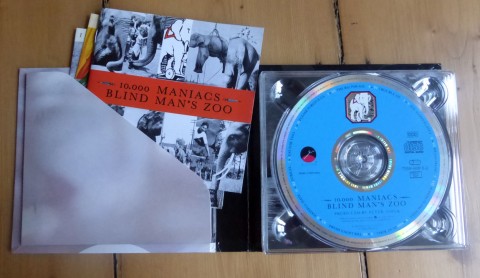 Slightly weird packaging for this 10,000 Maniacs ‘Trilogy’ that collects their three most successful albums In My Tribe, Blind Man’s Zoo, and Our Time In Eden. The photos on the cover aren’t in the right order for one thing, and all three booklets slot into a pocket on the inside front cover. The three discs are stuck in three transparent trays which are rather inelegant. I can see why this didn’t catch on, although as I had none of these on CD, pleased to pick it up! 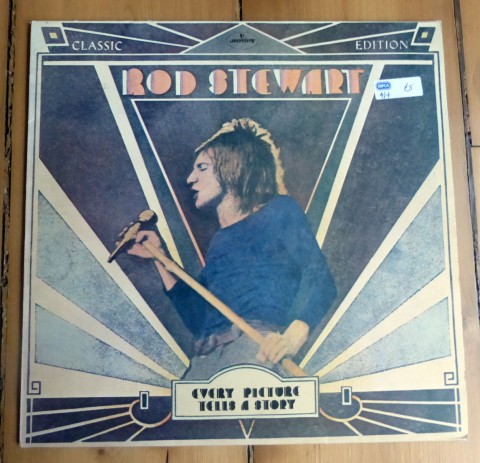 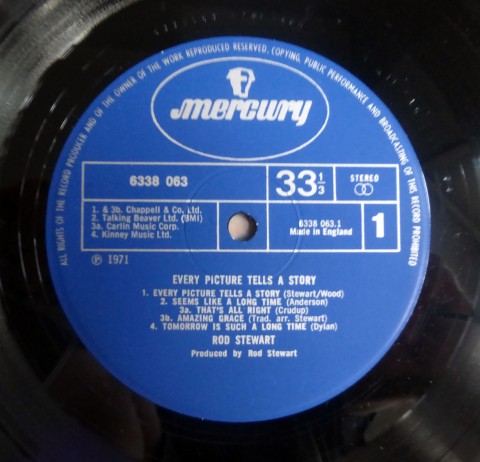 Let’s end on a classic. Rod Stewart‘s 1971 transatlantic chart-topper Every Picture Tells A Story. £5 is a little over the normal SDE budget for charity shop fair but hey, this record is in unbelievable condition for something that’s 44 years old – virtually mint. It’s also long been a favourite but never owned on vinyl.