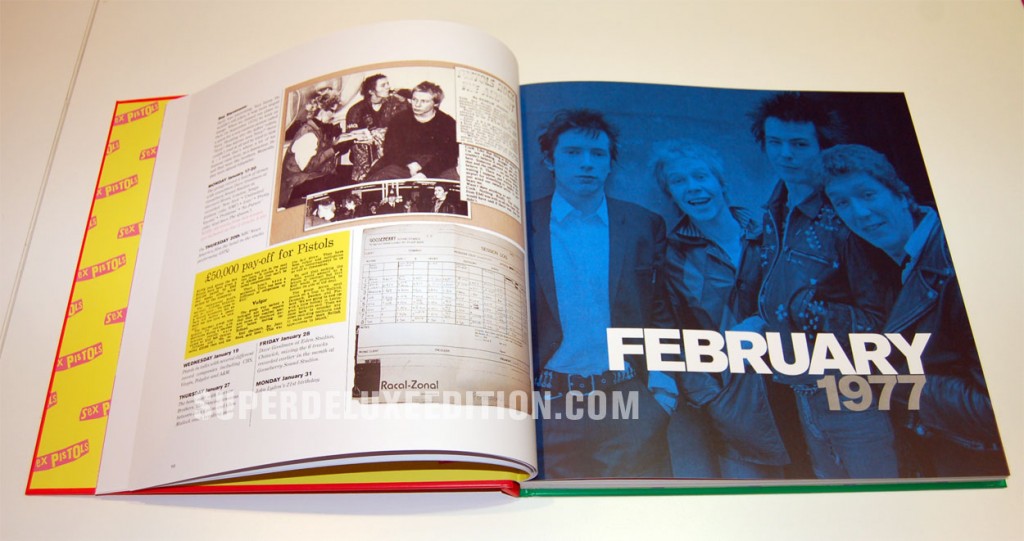 In September 1977 the Sex Pistols released their only album with Johnny Rotten (John Lydon) on vocals. It was preceded by three singles and a career’s worth of notoriety. The Pistols had become front page news overnight when they appeared on the Today programme in December 1976, and had sworn at host Bill Grundy after he drunkenly goaded them on air.

By summer 1977 the band couldn’t play live as most councils across the country banned them, and they were left with no choice but to play in Sweden, Holland and Norway. Sid Vicious had replaced Glen Matlock earlier in the year, but Sid was never a bass player like Glen.As the rest of the band admitted years later, losing Glen (or getting rid of Glen) was a mistake, but at the time the tensions between him and John had become too much and Glen happily left to start another band (the Rich Kids). Glen had been a songwriter as well as bass player, having a large hand in writing the three singles Anarchy in the UK, Pretty Vacant and God Save The Queen.

Without him, the band struggled to write any new material, and came up with only Bodies and Holidays in the Sun. The band also performed a Sid song in late 1977, Belsen Was A Gas. It was thought that this was never properly recorded, but a demo was recorded in late 1977 and this has now been found and put onto the second CD of this new super deluxe edition box set. You can also hear it here.

The album was recorded by Steve Jones on guitar and bass, deputising for Sid who was in hospital with hepatitis and whose limited bass playing skills weren’t up the job, and Paul and John at Wessex Studios. The recording was produced by Chris Thomas and engineered by Bill Price. They worked by recording the drums and a basic guitar line, then added bass and more guitars, then John’s vocals. The album caused more controversy when a policeman saw it displayed in a record shop window, it’s title Never Mind The Bollocks seeming to cause offence. Virgin Records were taken to court, and promptly won the case as it was shown that the word ‘bollocks’ in context merely meant ‘nonsense’.

Thirty five years later and Universal Music now own the rights to this album. This week they released a four disc (3CDs + DVD)  super deluxe edition and a much cheaper two-CD ‘deluxe edition. This version has been remastered from the original tapes for the first time. Apparently until the move from Virgin to Universal, these tapes were missing. Previous re-releases such as the Sex Box (2002), did not use the original source tapes.

I was very much looking forward to hearing this, having been a life-long Sex Pistols fan. I was also eager to see how this compared to the excellent (and much cheaper) Sex Box that Virgin released in 2002. This highly priced Box Set would have to do quite a lot to impress me as a fan and make me part with around £100.

Just a look at the track listing did not immediately impress me. Inexplicably, the B-side to Anarchy in the UK – I Wanna Be Me – is not included, despite the other B-sides being present and correct.  No Fun, the B-side of Pretty Vacant is the version with the ending cropped off (as it appears on the single), not the full length version. Were Universal even aware that there is in fact a full length version? (it appears on the Sex Box). It’s a small oversight, but I do feel that if you’re going to do these super deluxe sets, you ought to get them right.

Despite remastering from the original tapes, it was pretty hard to determine if the remaster sounds any better, or worse, than previous remasters. Close comparison with the Sex Box audio didn’t help – I struggled to be able to tell the difference.

The B-sides and demos on the second CD sound great. The alternate versions and demos show two things: Firstly, that Glen’s bass playing is far superior and makes the songs bounce – Steve’s bass on the album plods and performs a ‘get the job done’ role. The second point is that the very existence of previously unheard alternate versions shows that the band, along with Chris Thomas, strove to produce the best version of each song, trying different vocal takes and adding guitars to flesh the sound out.

The live gigs on the third CD consists of one that has already been released (Trondheim was an extra cd with a limited edition of Kiss This in 1999) plus a gig in Sweden in 1977. They sound as you might expect. Rough and ready, but Sid’s playing was good enough before they went to America and imploded.

The Never Mind The Bollocks Classic Albums documentary, although available separately, would have been a great inclusion with this set. As it is, with the band in hiatus and John in full-on PIL mode –  and seemingly not wishing to discuss the Pistols – there is no new documentary at all. We do get some period interviews and live footage from the Stockholm (Happy House) and Penzance live (Winter Gardens) live gigs.

However, I do know that the Huddersfield Xmas Day 1977 gig exists and could have surely been put on there (parts of it were in the Filth and the Fury Documentary), along with Sex Pistols Number 1 Film (a sort of promo film that Julien Temple put together in 1977 that was shown before they played at the Screen on the Green in May 1977 (see below).

As a package, it all looks great- the Sex Pistols’ product always looked good, thanks to Jamie Reid’s graphics and art design. The set is dominated by the ‘Bollocks Diaries’ the large book, full of excellent photos, newspaper cuttings and which traces the narrative of 1977. This book houses the four discs. The only other content is a large poster, and a wallet containing the replica seven-inch single; a reproduction lyric sheet and some stickers.

The set has similarities with The Who’s Quadrophenia Director’s Cut box from last year, with the wallet, seven-inch and lyric sheets, but that set had the advantage of personal involvement from Pete Townshend, while you get the feeling that with this Sex Pistols box, the band members themselves only consulted at arm’s length (if that).

I can’t say the high price here is totally justified, though I suspect that along with the limited edition single picture discs, and other special editions, Universal know that hard-core fans WILL buy them no matter what.

The 2CD ‘deluxe’ version contains the remastered album, B-sides, and the live stuff, and is currently on sale at Amazon for £13. The demos are worth hearing if you’re really interested in hearing early versions of the songs or alternate versions and the book is very special, but in terms of value for money the double CD is hard to beat.

Full track listing for this box can be found here and extensive photo gallery is here.