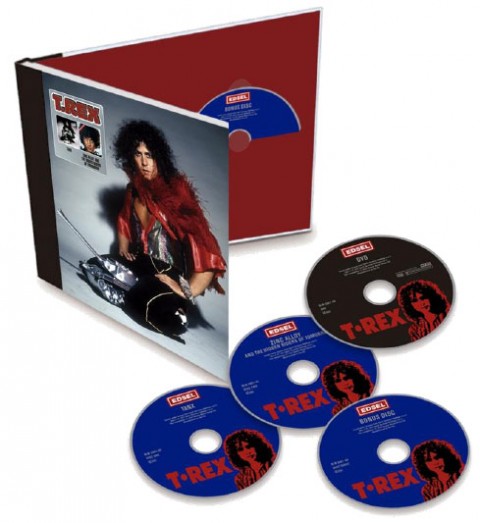 Track listings are not yet available, but judging by previous deluxe editions, and with two CDs allocated per album, we can expect a plethora of non-album singles, b-sides and more. The DVD will include promo videos and TV appearances and the whole thing comes delivered in a 12″ x 12″ hardback book with new notes by Mark Paytress and Tony Visconti.

Demon are creating 1500 of these sets and selling direct to fans. The first 150 people to place orders get the “Ultimate Fan Bundle” which includes a Tote Bag, digital redemption of the audio content and a special coloured vinyl seven-inch single of Solid Gold Easy Action b/w The Groover in special replica Japanese sleeve.

The “Deluxe Fan Bundle” is the same as above but without the seven-inch single and this is limited to the first 300 pre-orders. After that, all orders revert to ‘just’ the physical Tanx and Zinc Alloy five-disc deluxe edition book. All configurations are priced the same – £59.99.

The other incentive Demon are offering is the chance to get your name printed in the book. It seems if you get your pre-order in before 13th January, this will apply. You can pre-order using the link below or by clicking here. At the time of writing, the three options (Ultimate Fan / Deluxe Fan / Deluxe) outlined above all show individually. Obviously, select the best one available, but once the ‘fan’ versions sell out they will be removed.

Tanx and Zinc Alloy Deluxe Sets/Bundles will ship on 3 March 2014.