A 25th anniversary edition of The Cranberries‘ debut album Everybody Else Is Doing It, So Why Can’t We? will be released in October across a number of formats including a four-disc box set

This anniversary reissue was already in the works when Dolores O’Riordan died in January this year. After much soul searching, the band put out a statement saying “we thought about it and decided that as this is something that we started as a band, with Dolores, we should push ahead and finish it.”

The album was recorded in 1992 and produced by Stephen Street (who had worked on Blur’s Modern Life Is Rubbish in the same year). It was released in March 1993 and features the singles ‘Dreams’ and ‘Linger’; the latter a transatlantic top ten hit. The album topped the charts in both the UK and Ireland. 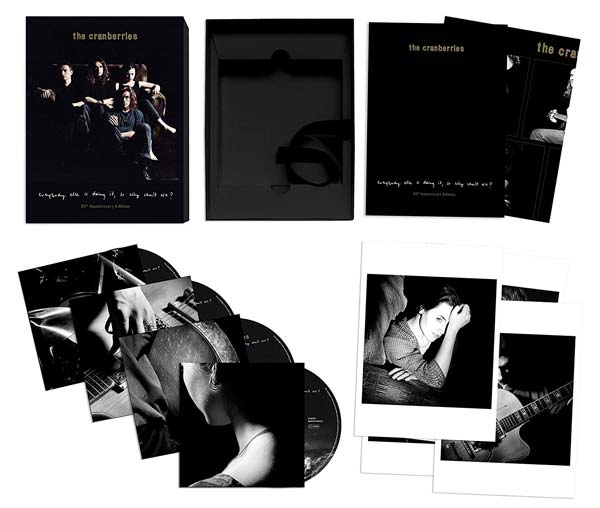 Everybody Else Is Doing It, So Why Can’t We? 4CD box set


A ‘complete sessions’ reissue of Everybody Else Is Doing It, So Why Can’t We? in 2002 added six bonus tracks, but this new 25th anniversary edition goes much further. The four disc box set contains the album on the first CD and bonus material spread over three further discs. Of course all of those previous bonus tracks are included, but so too are unreleased early demos, a live performance from 31 July 1994 at the Féile Festival in Ireland and a series of radio sessions from 1992-1993. The box includes a poster and four postcards.

There is a two-CD deluxe (disc two is repeated from the box) and a single CD and single vinyl LP edition (at the time of writing there are no links for the vinyl). Presumably, the audio is remastered, although no word as yet on the details.

Everybody Else Is Doing It, So Why Can’t We? will be reissued on 19 October 2018. A new album from The Cranberries (for which Dolores had already recorded vocals) is expected in 2019.

Everybody Else Is Doing It... 4CD box set

Everybody Else Is Doing It... 2CD deluxe edition

Everybody Else Is Doing It... vinyl LP

Everybody Else Is Doing It... single CD

The Cranberries / No Need To Argue remastered and expanded

The Cranberries‘ final album, In The End, which is due for release next month, is…

The Cranberries / No Need To Argue coloured vinyl reissue

The Cranberries second album, No Need To Argue, is being reissued as a coloured vinyl…