With no deluxe reissue of 1987’s multi-platinum Bridge Of Spies album coming any time soon, Carol Decker and her ex-partner Ron Rogers have grasped the initiative and created their own celebration of T’Pau’s debut.

The Story Behind The Tracks is a CD+DVD set – released on Carol’s own Gnatfish Records label – that combines an hour long documentary with a CD of all the songs from Bridge Of Spies in demo form as well as additional demos, including six previously unheard tracks.

The film takes us from Carol and Ron’s early days in a band called The Lazers, (when he was still a telephone engineer and Carol was getting by doing bar work) through to the breakthrough success of Heart and Soul in the US and China In Your Hand hitting number one in the UK. It’s a highly entertaining watch, with the pair revisiting old haunts such as their flat in Pengwern Boatclub in Shewsbury (“a gift from the gods”), the now derelict Woodside Studios, and the Columbia Hotel in London where the record company would put them up on their initial visits to London.

The ex-couple are followed around as they explore their past, and this footage is intercut with talking heads-style interviews. Decker is great fun and highly entertaining as she re-treads footsteps laid 25 years earlier. Looking around their old flat above the boat club she points out that “China In Your Hand was written in this room” before directing a quip “you could have tidied up, love…” in the direction of the poor chap who has agreed to let them in to what is now his flat. Despite the jollity, she acknowledges “mixed feelings” about coming back.

The film successfully brings these memories to life by regularly cutting to many personal photos from the era and video footage of a youthful Carol and Ron larking around. As well as being specific to T’Pau, it also shines a light on the music industry in the 1980s. Carol talks of sending off literally “hundreds” of demo tapes and plying a record company executive with beer and cake when he turned up for a showcase they were putting on in the function room in the boat club below their flat (it wasn’t successful).

As a demonstration of how times have changed, we’re reminded that it was an inauspicious beginning to the album with the label hating it, and the first two singles Heart and Soul and Intimate Strangers (before it was re-titled Sex Talk) both flopping badly in the charts. As Ron points out in the film “To have the MD of your record company haul you into the office and say ‘you’re a pile of shit’ is not encouraging”. But luckily for T’Pau, Siren (the label in question) were so deeply committed financially they had no real option but to go with it, “and it worked” says Ron.

And work it did. A re-recorded version of China In Your Hand (the album version “wouldn’t edit”) kept George Harrison’s Got My Mind Set On You off number one in the singles chart, while Bridge Of Spies sat at the top spot with Paul McCartney’s All The Best compilation was at number two.

The film very much explores T’Pau before the big hair, big guitars and big choruses and it is obvious from Carol in particular, as she is being filmed, that there is a mixture of pride at what the band achieved with a certain yearning back to the youth, simplicity and anticipation of those early days when everything was still up for grabs.

Although the documentary stops at the summit of T’Pau’s success, and doesn’t dwell on the descent thereafter, a pinch of regret at how relatively brief the glory days were is evident. Speaking to SuperDeluxeEdition, Carol told us:

The 18-track CD that accompanies the DVD contains a mixture of early four-track recordings (Heart and Soul, Sex Talk, Monkey House) a 16-track demo of I Will Be With You, and the other fourteen tracks recorded on a 24-track machine.

The Story Behind The Tracks has all the content you could really hope for from a deluxe reissue, with the significant exception of the original Bridge Of Spies album itself, along with the B-sides / non-album tracks, and promo videos. That content may still emerge officially from Universal Music at some point, but until then fans should be more than satisfied with the personal offering that is The Story Behind The Tracks.

The Story Behind The Tracks CD+DVD set can be ordered here.

The T’Pau 25 UK tour kicks off on Tuesday April 9th at Buxton Opera House, and Ron Rogers will rejoin the band for these special anniversary live performances. Booking information can be found here.

Tomorrow on SuperDeluxeEdition: Carol Decker talks about why she is taking T’Pau back on the road, the making of The Story Behind The Tracks and her plans for a new album. 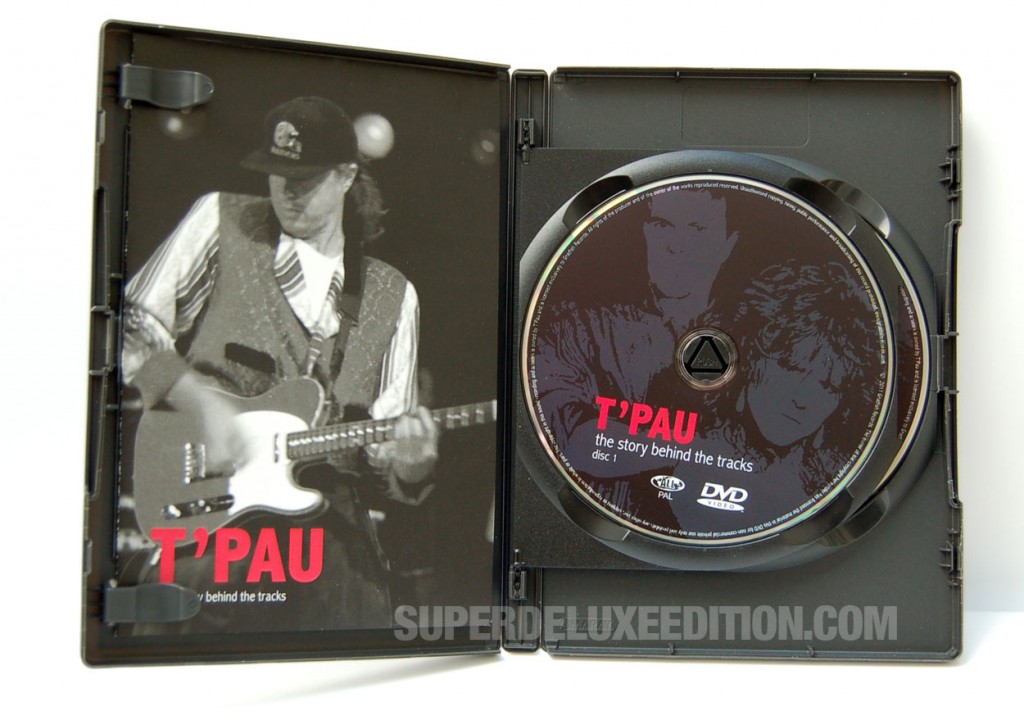 The Story Behind The Tracks / CD Track listing

As expected, the newly announced T’Pau deluxe set, The Virgin Anthology, has dropped in…

Universal/Virgin are to issue T’Pau: The Virgin Anthology, a new 4CD deluxe set that…