New vinyl comp is a shadow of its former self

Later this month Universal are to release a festive vinyl compilation called The Christmas Album which revives the style and spirit – if not the quality – of its 30-year old ‘Now That’s What I Call Music’ predecessor.

Although there has been a myriad of Christmas compilations over the decades, with multi-CD sets in latter years rather bloated and lacking in curation, the original Christmas Album had a close to perfect selection of festive singles from an era where the quality was high and aiming for the top spot of the UK singles chart at Christmas was actually a respected endeavour, undertaken by A-list artists as opposed to a Syco-driven commercial opportunity for X-Factor nonentities. 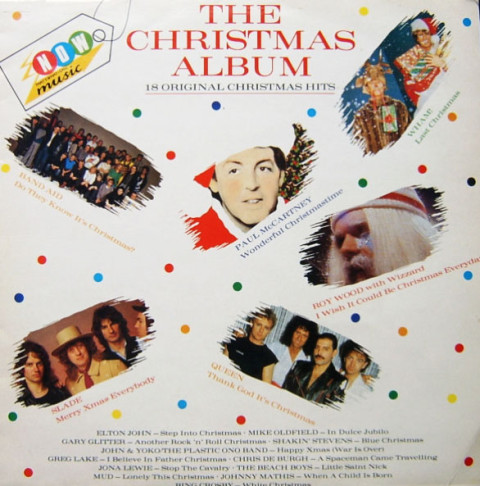 The original album was issued under the Now That’s What I Call Music banner (check out the original ‘gift-tag’ graphic), and actually knocked Now 6 from the top spot for a few weeks. The record and cassette (The Christmas Tape) contained 18 tracks, while the quaintly titled The Christmas Compact Disc – issued a year later in 1986 – was limited to 16 songs, omitting Lennon‘s Happy Xmas (War Is Over) and Greg Lake’s I Believe In Father Christmas. 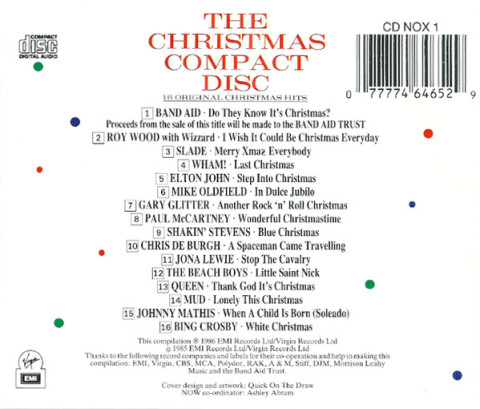 The Christmas Compact Disc was issued in 1986

The Christmas Album 2016-stylee only has six tracks in common with the original record and is a significantly weaker collection. McCartney, Elton John, Mike Oldfield, The Beach Boys, Jona Lewie and Queen are amongst the omissions, although it does include The Fairytale Of New York which of course didn’t exist in 1985.

By piggybacking on the design and charm of the original compilation and issuing this on vinyl, the record label clearly hopes to sucker fans into a nostalgia-based purchase, although surely it’s close to pointless exercise. Most people already have at least one Christmas collection on CD and while I have nothing against trying something on vinyl, they should have either issued the original as is (perhaps on a double vinyl set), or not bothered at all.

The Christmas Album is issued on vinyl on 25 November 2016. Bah, humbug!