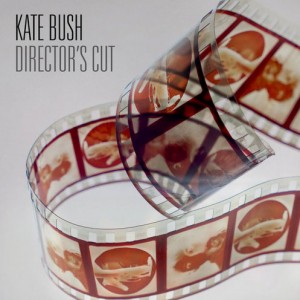 This week sees the release of Kate Bush’s new album Director’s Cut. Six years on from 2005’s Aerial, this album revisits tracks from 1989’s The Sensual World and 1993’s The Red Shoes.

Kate – seemingly unhappy with the ‘sound’ of some of these original tracks – has gone back to the multi-tracks and removed certain elements and augmented the original performance with new instrumentation. Drums and Bass are the most prominent changes, with legendary session drummer Steve Gadd behind the kit for most tracks, and the songs all have a new vocal performance, with Kate changing the key to many of them to suit her vocal range of 2011. A few tracks have been re-recorded completely, including the much-loved This Woman’s Work.

Reworking these old tracks is a suitably perverse decision from Kate Bush. Aerial was received as a minor masterpiece, which you would have thought would have encouraged her to move forward relatively quickly, with another album of new material. But instead we are served-up tracks from the two albums that preceded Aerial, rather than anything new.  And what is wrong with The Sensual World and The Red Shoes anyway?

As far as The Sensual World goes, not much. Yes, there is a lot going on in most of the tracks, with Kate layering many sounds together as she had done with 1982’s The Dreaming and 1985’s seminal Hounds of Love. And true, it does sound like an album recorded in the 1980s, but there is nothing wrong with that. Would Harold Faltermeyer’s Axel F be ‘better’ if it was re-recorded with a piano and a real drummer instead of a synth and drum machine?

The Red Shoes is another beast altogether. It’s widely regarded by fans as one of her weakest albums. This is partly down to some below-par songs (by her own high standards) and because it lacks that unworldly Kate-factor. With guest performers including Eric Clapton, Jeff Beck, Prince and Lenny Henry (!) here was just another rock star making just another album. The rumour at the time was that Kate was going for something more straightforward in preparation for a live tour. Regardless, the tour never happened and the album was viewed as a disappointment.

Let’s take a detailed look at the tracks on Director’s Cut.

Flower of the Mountain

This track was originally titled The Sensual World and was the lead single from that album in 1989. Kate had originally wanted to use the words of Molly Bloom’s soliloquy from James Joyce’s novel Ulysses, but his estate had refused permission and she was forced to rethink her approach to the song. Kate contacted them again recently, and to her surprise they finally granted permission – this new version is track one on Director’s Cut.

Maybe it’s a case of  ‘watch what you wish for’ since now Kate has finally got the words she wanted, the song suffers for it. It doesn’t help that the backing to The Sensual World has quite a bass-heavy production. Kate’s old vocal cut through this nicely, but the deeper tones of 2011 do not. The vocal delivery is also quite uncertain. It sounds like someone had shoved an A4 sheet of paper with new, unfamiliar words in front of Kate, and asked her to sing along to an instrumental version of The Sensual World. The vocal is far too high in the mix and feels completely detached from the music. It’s possible that this was the intention –  a half-spoken, half-sung ‘soliloquy’ over music. Either way, one of highlights of The Sensual Word album is, frankly, a mess, and amongst the weaker tracks on Director’s Cut.

This is a big improvement from the version on The Red Shoes. It’s has a much warmer, sweeter tone and the instrumentation is stripped back, with more room for the various elements to breath. Kate’s voice sounds great on this track too.

Another track from The Red Shoes, Kate again puts in a good vocal performance, and it does indeed have a nicer, more ‘analogue’ sound to it than the original. However, this song is no classic waiting to be rediscovered. Ultimately an average track, improved a little bit.

This track was released as a (digital-only) single to support the album and Kate went to the trouble to make a video for it starring Robbie Coltrane. If you’ve heard it, you will know Kate has controversially used an ‘autotune’ effect on the chorus to represent the sound of the computer communicating. If you can get used to this (and it is a challenge) this track is actually very successful. Steve Gadd does his best ’50 Ways to Leave Your Lover’ drumming and there’s some lovely bass and harmonica interplay in the extended ‘outro’, which is reminiscent of Peter Gabriel’s Don’t Give Up.

Like Lily, this track is undoubtedly improved by the new vocal and new mix but it has never been a particularly engaging song. Very skippable.

A rock-solid classic from The Sensual World, that shamefully peaked at only #25 in the UK charts back in 1989. What on earth is Kate thinking of, mucking around with this one, you might ask? Well, she approaches this track with great intelligence and opts for a completely new recording. It’s very minimal – a twinkly delight, as Kate sings beautifully over an electric piano and an ethereal chorus of backing vocals. Imagine lying on your back looking up at the night sky, and falling into sleep as you sing the melody. Outstanding.

Also a completely new recording, this track from The Red Shoes is another highlight from Director’s Cut. Kate does away with the strings of the ’93 version and keeps things simple again with piano, voice and choir. More meditative than the original, the melody is tweaked slightly and everything feels much more intimate. A very good track just got even better.

This track from The Sensual World strips away much of the original production. Kate voice again sounds much nicer here than on the rather shrill original. She takes a few liberties with the melody and the Trio Bulgarka play a smaller role, not coming in until near the end.

A definite improvement, Never Be Mine 2011 feels more intimate and can be rightly regarded as a success.

Top of the City

Another track from The Red Shoes that is an aural improvement, but none of this improves the actual song, which isn’t really very good, then or now.

And So Is Love

A single from The Red Shoes, this track features prominent guitar work from Eric Clapton. The guitar remains, albeit slightly lower in the mix. This song was never Kate at her best and nothing has changed in that respect.

After a couple of average tracks, the album ends on a high, with Kate mumbling her way through this completely unrecognisable version of Rubberband Girl. It sounds a bit like a Rolling Stones outtake from 1971. This footloose and fancy-free version is great fun and seems to be Kate letting her hair down a bit. A good track to end the experiment that is Director’s Cut.

It’s difficult to know how to judge Director’s Cut. One thing this exercise does prove is that no amount of knob-twiddling is going to magically transform an average song into a great song, but by the same token, a great song can be stretched and twisted out of shape quite radically and it will still remain a great song. To that end, This Woman’s Work is the shining beacon of this set and Moments of Pleasure is not far behind.

As a compilation of songs it’s obviously very narrow, taking in, as it does, only songs released within a four year period. The Red Shoes represents over 60 percent  of Director’s Cut, so if you were not overly keen on that album do not come to the party expecting miracles.  It would have been a more interesting exercise for the listener if Kate had revisited tracks from across her entire output, rather than just from the two albums chosen. Her only compilation album was released 25 years ago, so a greatest hits of sorts is long overdue.

However, you get the feeling that Kate wasn’t too bothered about what people wanted to hear. Director’s Cut is the sound of Kate Bush satisfying her own artistic curiosity and taking us along for the ride.

The album is available as a 1CD edition in a hardback book format.

A Deluxe Edition is also available which consists of three discs: Director’s Cut, The Red Shoes (remastered) and The Sensual World (not remastered)