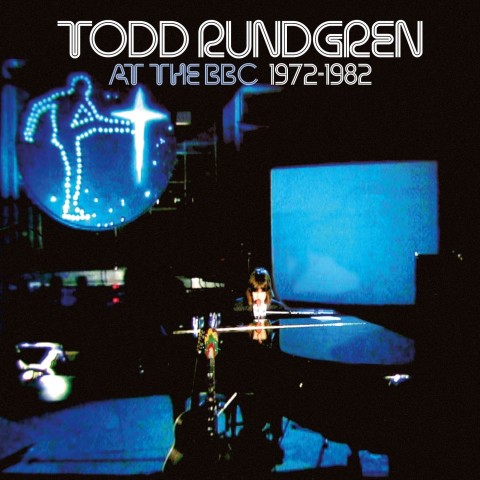 When Esoteric announced they would be plundering the Todd Rundgren archive, promising some unreleased nuggets from the vaults, there was much excitement amongst Rundgren fans. However, the initial offerings, the reissue of the previously available (in Japan) and only marginally interesting Disco Jets, along with the Live At The Electric Ballroom 1978 show (which sounds like the compressed, pre-mixed radio broadcast that it is) were welcome, but somewhat disappointing. Only the excellent Live At The Warfield 1990 offset the disappointment.

However, Esoteric have now come up trumps with a fantastic 3CD+DVD set, At The BBC 1972 – 1982. The clamshell box houses the four discs, which are packaged in cardboard sleeves, each featuring a different colour picture of Rundgren, along with a 16-page booklet with a very informative essay by Mark Powell, some great pictures and complete recording, track and personnel info.

Disc one (which is in mono only, as per the original recording) features a complete 30-minute 1972 In Concert broadcast where Rundgren (as he did in some other live shows in the ’70s and ’80s) plays along to pre-recorded backing tracks on I Saw The Light and Black Maria, while accompanying himself on piano on the other four tracks, including a lengthy Piss Aaron. The remaining two tracks on this CD feature the audio from the 1975 Utopia Old Grey Whistle Test performance (also included on the DVD). Top Rundgren scholars may note the omission of Todd’s 1972 Whistle Test performance – mentioned by Mark Powell in his essay – but this is due to the fact that that show (along with many other pre-1973 shows) were wiped soon after broadcast.

The second disc features the legendary and much-bootlegged 9th October 1975 Hammersmith show, featuring the four-piece Utopia (trimmed down from the six-piece ‘Another Live’ band but still featuring John Siegler on bass) augmented by two backing vocalists, one of whom is Luther Vandross. Although this ‘Another Live’ era show did get an official release on Shout Factory in 2012, this latest version also includes a previously unreleased version of Bernstein’s Something’s Coming, is mastered at a slightly lower level than the previous release, and sounds a little tighter.

The final CD in this set offers the first official release of the much-bootlegged 25th January 1977 Utopia Oxford Polytechnic show. Featuring the longest running incarnation of Utopia (as a four-piece with Kasim Sulton on bass), the show contains several tracks from their current Ra album including the complete live version of Singring And The Glass Guitar and all in excellent quality audio.

The killer though is disc four, a 70-minute DVD, which opens with Rundgren, Roger Powell (surrounded by banks of synthesisers), John Wilcox, John Siegler plus vocalists Anthony Hinton and Luther Vandross in the Whistle Test studios almost 40 years ago. Rundgren showcases his soul and progressive leanings, delivering a soulful Real Man at the piano before picking up his guitar for The Seven Rays which he precedes with one of his quirky introductions. This segues into what is probably the only live footage in existence from Utopia’s 1977 Ra Tour. Totalling 15 minutes, it was originally broadcast in 1978 on a Whistle Test special from the Bearsville Picnic. We see the Rundgren/Wilcox/Powell/Sulton quartet on the elaborate stage set for the US leg of the tour (UK dates were played without the fancy staging), playing Singring And The Glass Guitar complete with individual instrumental solos. The footage culminates with Todd climbing to the top of a large pyramid, jumping off and subsequently smashing the glass (ice) guitar. The segment also includes some interview footage of Todd in his video studio.

The final 40 minutes comprise Todd’s complete May 1982 Whistle Test recording from BBC TV centre, including Song Of The Viking and Lysistrata, neither of which were aired on the original broadcast. Todd was in great form, playing piano and guitar, with a set list including classics such as It Wouldn’t Have Made Any Difference and Can We Still Be Friends alongside newer tracks including Tiny Demons.

If one is looking to be picky about omissions, I believe the BBC also aired a radio broadcast of a May 1982 Rundgren show recorded at London’s The Venue but it was a very similar – although longer – show to the 1982 Whistle Test recording, so perhaps that is why it’s not included here. That aside this set is an absolutely essential purchase for all Rundgren fans.

Review by Brent Keefe for SuperDeluxeEdition.

RECORDED AT OXFORD POLYTECHNIC, 25TH JANUARY 1977FOR BBC RADIO ONE