The musician’s musician. A treasure trove of unreleased live material from Richard Thompson 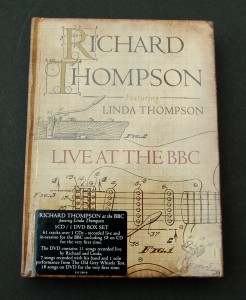 Richard Thompson’s live performance’s recorded for the BBC over 36 years are celebrated in this 4-disc set from Universal.

It comprises 61 tracks, across three CDs (58 on CD for the first time) and a live DVD made up of rare performances, including spots on BBC TV’s The Old Grey Whistle Test.

A fascinating ‘alternate’ look at the his back catalogue, the first CD concentrates on the fruitful decade Thompson spent recording with his wife Linda, having left renowned folk group Fairport Convention.

A virtuoso guitarist, Thompson had spent a year or so doing lots of session work for artists such as Nick Drake and John Martyn and following this he went on to record his first solo album, Henry the Human Fly. It was during the recording of this album that he met the then Linda Peters (she sang backing vocals). This kicked off a professional and personal partnership that would endure until 1982.

Highlights from the Richard and Linda years include a scratchy Dragging the River from the John Peel Show in 1973 (this song is previously unreleased), the sublime I Want to See the Bright Lights Tonight from 1974, and It’s Just The Motion from their acclaimed final album Shoot Out The Lights in 1982. In fact, we get seven tracks from this Live At The Paris Theatre 1982 session. This was the year they split and the tension is palpable.

The remaining two CDs include much solo Thompson from the Andy Kershaw shows, including a phenomenal acoustic session from 2001, and we are also treated to seven tracks from the Hammersmith Palais in 1986. The discerning listener can’t help but miss the beautiful singing voice and harmonies of his ex-wife, but on the other hand there is much enjoyment to be had from hearing his reinterpretations of earlier material. The final CD, for example, includes a solo rendition of I Want to See the Bright Lights Tonight with Thompson amazing on his acoustic guitar, and we get multiple performances of Wall of Death across the four discs.

The final track on disc three brings us full circle, with a 2009 rendition of Meet On The Ledge, an early Fairport Convention songwriting contribution.

The DVD has some excellent archive footage of the Thompsons. The 1975 Whistle Test includes a spine tingling performance of A Heart Needs a Home and BBC Bristol’s A Little Night Music has seven performances from 1981 a period when, as Linda mentions in the excellent 40-page booklet, Richard was “very unhappy” (he had met someone else and the couple would separate shortly after). As if to underline this, the individual members of the band during these performances stand physically separated from one another, on their own plinths, with Richard and Linda far apart.

Anyone with more than a passing interest in Richard Thompson and in particular the decade he spent performing with Linda, will find much to enjoy here. The DVD and first disc are worth the price of admission alone, but once you add to the mix the additional discs that concentrate on his years as a solo performer this becomes a great value offering.