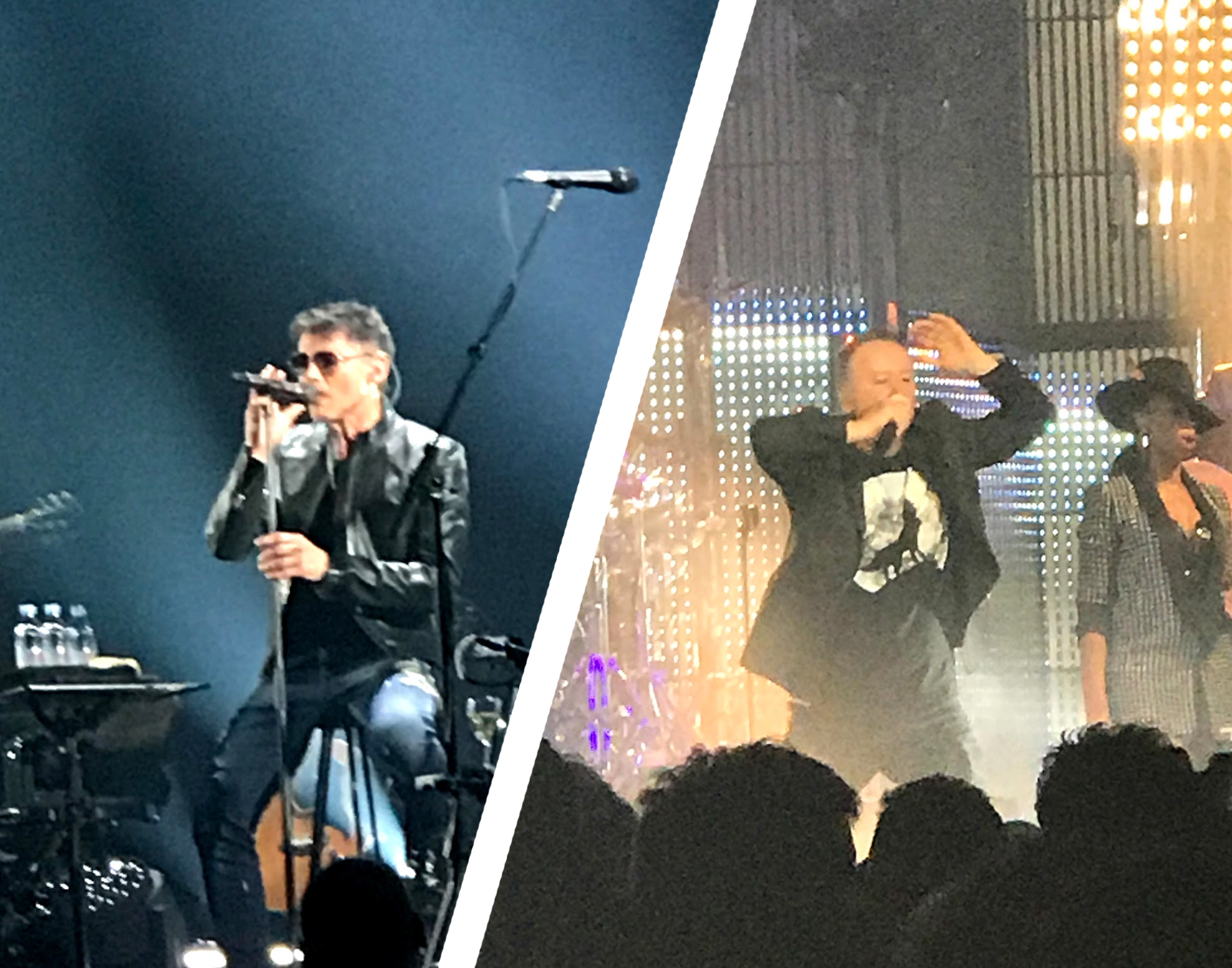 I went to two gigs in London this week – a-ha and Simple Minds – and they made for an interesting comparison.

‘An Acoustic Evening With a-ha’ sounded promising but also faintly ludicrous, considering they were playing London’s O2 Arena – not exactly known for its intimacy – but against all the odds the Norwegian trio managed to stage a superb show based on the track listing and arrangements on last year’s MTV Unplugged album.

Simple Minds played the much smaller Roundhouse in Camden but ironically, for this writer, failed to connect and communicate in quite the same way as a-ha did on the bigger stage.

Simple Minds live at The Roundhouse on 15 Feb, 2018 (click image to enlarge)

On paper, I quite liked the plan Simple Minds had for the evening, which involved playing the new album Walk Between Worlds in full, having a Q&A session and then some hits, but when it came to the reality of this format, I’m not sure it was particularly successful. I hadn’t played the new record at home, and hearing it first in a live setting – in full, mind – wasn’t a particularly enjoyable experience. I thought Big Music was pretty good, but I’ll reserve full judgement on the new album once I’ve heard the studio recording, however on Wednesday night it just sounded like a thick slab of averageness. It didn’t help that the sound mix was rather muddy with layers of keyboards and a lot of bottom end on everything, but it seemed to drag on for ages. I’m a little reluctant to criticise, since I do like it when bands make an effort to do more than simply trot out the ‘greatest hits’ but digging into your back catalogue for ‘deep cuts’ or rarely played fan favourites is one thing, but playing the new album in full is a risky business, since artists are rarely in a position to judge how good the work is so soon after release.

The Q&A was a failure. These can be fantastic in a theatre/cinema type setting but in a fairly noisy ‘gig’ environment like The Roundhouse, with most of the audience standing (and wondering when the band were going to get on and play something they knew!)  it really didn’t work. It didn’t help that Scottish broadcaster and writer Billy Sloan was clearly a big fan and friend of the band and so there was nothing approaching a challenging or thoughtful question. The whole thing could be summarised in the sentence ‘But tell me Jim, why are Simple Minds so good?”

When I saw Suzanne Vega play last year she said something interesting about how hard it is to play new material to a responsive audience when they are just waiting for you to play the hits, so she made a point of playing some of the more familiar material early, which perhaps adjusted their mindset when it came to listening to newer material. This wasn’t something I’d ever really considered, but it was an intelligent reading of the fan-artist relationship and worked very well.

For the last 40 minutes or so when Simple Minds finally did play ‘the hits’ the roof came off the venue but by that point some of my goodwill had disappeared, and being towards the back in The Roundhouse with those pesky pillars didn’t help. 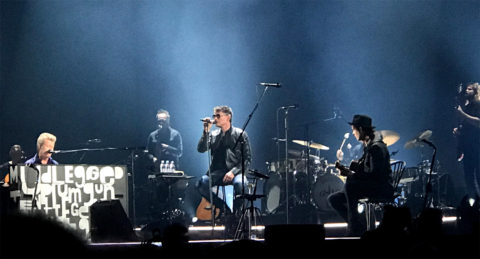 a-ha had around seven extra Norwegian musicians on stage at the O2 on the previous night, including a string section and in contrast to Simple Minds, the sound mix was incredibly detailed and precise. There was little fanfare when the show started – Morten, Paul and Magne just walked on stage to warm applause, and close to no rock bombast, but there was something resembling musical integrity which was arguably lacking at Simple Minds, who seemed more concerned with having very young looking women in the band (keyboards and drums) than worrying about how things sounded. To be fair, Simple Minds have not so long ago put out their own acoustic album, but the delicacy and creativity of a-ha’s arrangements, combined with Morten Harket’s remarkably ageless voice was something to behold.

Paul and Morten said virtually nothing all night leaving Magne as the master of ceremonies and he was as witty as usual, asking the audience if they could hear the acoustic music okay, and pithly noting that the acoustic set was ‘brought to you by electricity’.

The set list echoed the album, delivering rearranged hits (I’ve Been Losing You, The Sun Always Shines On TV, Hunting High And Low, The Living Daylights, Take On Me) with deeper cuts (This Alone Is Love, Scoundrel Days, Living A Boy’s Adventure Tale). A rare live outing for the title track of the band’s fifth album, Memorial Beach, was a particular highlight, for me. 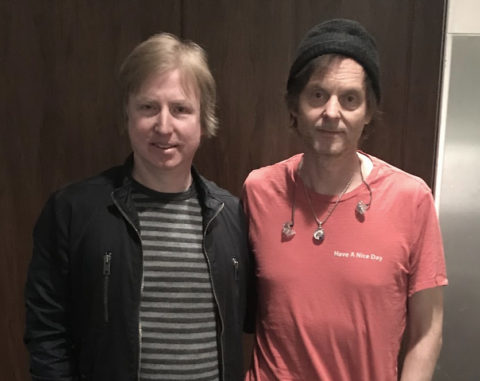 Paul from SDE and Paul from a-ha!

I spoke to Paul Waaktaar backstage before the a-ha show and that interview will be published very soon. He had some interesting things to say about the the future of the band. 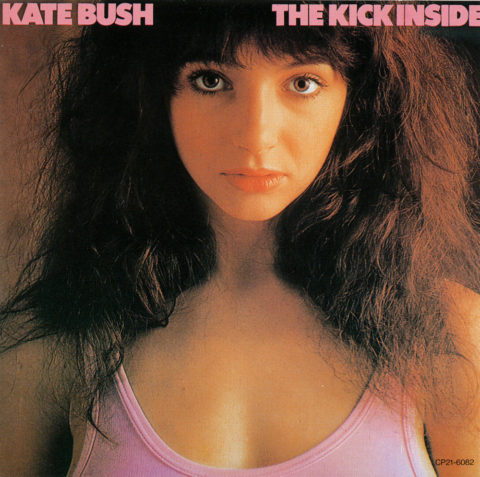 Happy Birthday to The Kick Inside!

Kate Bush‘s debut album The Kick Inside was released on this day in 1978. The album reached number three in the UK charts and features the hit singles Wuthering Heights and The Man With The Child In His Eyes.

The image above is the original Japanese cover but there were actually many different cover variations around the world and I’d recommend you head over to KateBushNews.com for an interesting feature on the UK ‘kite’ cover.

I’m off to the Islington Assembly Hall later tonight to watch tribute band Cloudbusting perform the album in its entirety! Back in January this blog marked the 40th anniversary of Wuthering Heights – you can read that feature here.